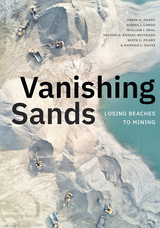 In a time of accelerating sea level rise and increasingly intensifying storms, the world’s sandy beaches and dunes have never been more crucial to protecting coastal environments. Yet, in order to meet the demands of large-scale construction projects, sand mining is stripping beaches and dunes, destroying environments, and exploiting labor in the process. The authors of Vanishing Sands track the devastating impact of legal and illegal sand mining over the past twenty years, ranging from Africa, Asia, and the Caribbean to South America and the eastern United States. They show how sand mining has reached crisis levels: beach, dune, and river ecosystems are in danger of being lost forever, while organized crime groups use deadly force to protect their illegal mining operations. Calling for immediate and widespread resistance to sand mining, the authors demonstrate that its cessation is paramount for saving not only beaches, dunes, and associated environments but also lives and tourism economies everywhere.
AUTHOR BIOGRAPHY
Orrin H. Pilkey is Emeritus James B. Duke Professor of Earth and Ocean Sciences at Duke University and the author and coauthor of many books.

Norma J. Longo, a geologist and photographer, is coauthor with Pilkey of several books on coastal issues.

William J. Neal, Emeritus Professor of Geology at Grand Valley State University, is an expert on ocean and Great Lakes shoreline evolution and coauthor of many books with Pilkey.

Nelson G. Rangel-Buitrago is Professor in the Geology, Geophysics, and Marine-Research Group at the Universidad del Atlántico, Barranquilla, Colombia, and a prolific author of coastal science studies.

Hannah L. Hayes is a scholar of changing land rights, disaster capitalism, and risk management in Barbuda and Fiji.
REVIEWS
"The authors combine their enthralling case studies with actionable suggestions: governments should buy coastal lands 'to create management units,' for instance. Beachgoers, policymakers, and builders alike will something to consider in this shocking study."

"An informative, detailed, extensively documented scholarly examination of sand mining and its associated issues that will appeal to geologists, environmentalists, and those concerned about climate change."