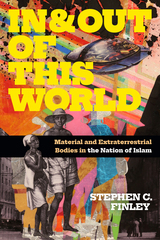 With In and Out of This World Stephen C. Finley examines the religious practices and discourses that have shaped the Nation of Islam (NOI) in America. Drawing on the speeches and writing of figures such as Elijah Muhammad, Malcolm X, Warith Deen Mohammad, and Louis Farrakhan, Finley shows that the NOI and its leaders used multiple religious symbols, rituals, and mythologies meant to recast the meaning of the cosmos and create new transcendent and immanent black bodies whose meaning cannot be reduced to products of racism. Whether examining how the myth of Yakub helped Elijah Muhammad explain the violence directed at black bodies, how Malcolm X made black bodies in the NOI publicly visible, or the ways Farrakhan’s discourses on his experiences with the Mother Wheel UFO organize his interpretation of black bodies, Finley demonstrates that the NOI intended to retrieve, reclaim, and reform black bodies in a context of antiblack violence.
AUTHOR BIOGRAPHY
Stephen C. Finley is Inaugural Chair, Department of African and African American Studies at Louisiana State University, and coeditor of The Religion of White Rage: White Workers, Religious Fervor, and the Myth of Black Racial Progress and Esotericism in African American Religious Experience.
TABLE OF CONTENTS