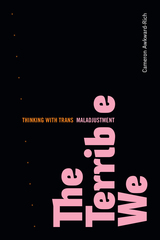 In The Terrible We Cameron Awkward-Rich thinks with the bad feelings and mad habits of thought that persist in both transphobic discourse and trans cultural production. Observing that trans studies was founded on a split from and disavowal of madness, illness, and disability, Awkward-Rich argues for and models a trans criticism that works against this disavowal. By tracing the coproduction of the categories of disabled and transgender in the United States at the turn of the twentieth century and analyzing transmasculine literature and theory by Eli Clare, Elliott DeLine, Dylan Scholinski, and others, Awkward-Rich suggests that thinking with maladjustment might provide new perspectives on the impasses arising from the conflicted relationships among trans, feminist, and queer. In so doing, he demonstrates that rather than only impeding or confining trans life, thought, and creativity, forms of maladjustment have also been and will continue to be central to their development.