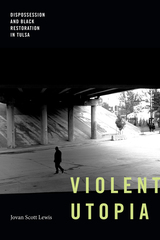 In Violent Utopia Jovan Scott Lewis retells the history and afterlife of the 1921 Tulsa race massacre, from the post-Reconstruction migration of Black people to Oklahoma Indian Territory to contemporary efforts to rebuild Black prosperity. He focuses on how the massacre in Tulsa’s Greenwood neighborhood—colloquially known as Black Wall Street—curtailed the freedom built there. Rather than framing the massacre as a one-off event, Lewis places it in a larger historical and social context of widespread patterns of anti-Black racism, segregation, and dispossession in Tulsa and beyond. He shows how the processes that led to the massacre, subsequent urban renewal, and intergenerational poverty shored up by nonprofits constitute a form of continuous slow violence. Now, in their attempts to redevelop resources for self-determination, Black Tulsans must reconcile a double inheritance: the massacre’s violence and the historical freedom and prosperity that Greenwood represented. Their future is tied to their geography, which is the foundation from which they will repair and fulfill Greenwood’s promise.
AUTHOR BIOGRAPHY
Jovan Scott Lewis is Associate Professor and Chair of Geography at the University of California, Berkeley, and author of Scammer’s Yard: The Crime of Black Repair in Jamaica.
REVIEWS
"Violent Utopia’s findings shed a searching light on Oklahoman history but are not limited to or by it. Whilst humble enough to only define itself as a ‘minor contribution’ to the reparations movement, Violent Utopia’s great strength is an analytical dexterity that studiously balances the dialectical dance of anti-Black violence and Black freedom dreams."

“This thought-provoking book is worth reading. It shows that much can be learned from studying Black communities from a critical race perspective.”