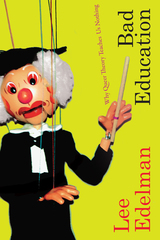 Long awaited after No Future, and making queer theory controversial again, Lee Edelman’s Bad Education proposes a queerness without positive identity—a queerness understood as a figural name for the void, itself unnamable, around which the social order takes shape. Like Blackness, woman, incest, and sex, queerness, as Edelman explains it, designates the antagonism, the structuring negativity, preventing that order from achieving coherence. But when certain types of persons get read as literalizing queerness, the negation of their negativity can seem to resolve the social antagonism and totalize community. By translating the nothing of queerness into the something of “the queer,” the order of meaning defends against the senselessness that undoes it, thus mirroring, Edelman argues, education’s response to queerness: its sublimation of irony into the meaningfulness of a world. Putting queerness in relation to Lacan’s “ab-sens” and in dialogue with feminist and Afropessimist thought, Edelman reads works by Shakespeare, Jacobs, Almodóvar, Lemmons, and Haneke, among others, to show why queer theory’s engagement with queerness necessarily results in a bad education that is destined to teach us nothing.
AUTHOR BIOGRAPHY
Lee Edelman is Fletcher Professor of English Literature at Tufts University, author of No Future: Queer Theory and the Death Drive, and coauthor, with Lauren Berlant, of Sex, or the Unbearable, both also published by Duke University Press.
TABLE OF CONTENTS