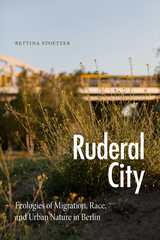 In Ruderal City Bettina Stoetzer traces relationships among people, plants, and animals in contemporary Berlin as they make their lives in the ruins of European nationalism and capitalism. She develops the notion of the ruderal—originally an ecological designation for the unruly life that inhabits inhospitable environments such as rubble, roadsides, train tracks, and sidewalk cracks—to theorize Berlin as a “ruderal city.” Stoetzer explores sites in and around Berlin that have figured in German national imaginaries—gardens, forests, parks, and rubble fields—to show how racial, class, and gender inequalities shape contestations over today’s uses and knowledges of urban nature. Drawing on fieldwork with gardeners, botanists, migrant workers, refugees, public officials, and nature enthusiasts while charting human and more-than-human worlds, Stoetzer offers a wide-ranging ethnographic portrait of Berlin’s postwar ecologies that reveals emergent futures in the margins of European cities. Brimming with stories that break down divides between environmental perspectives and the study of migration and racial politics, Berlin’s ruderal worlds help us rethink the space of nature and culture and the categories through which we make sense of urban life in inhospitable times.
AUTHOR BIOGRAPHY
Bettina Stoetzer is Associate Professor of Anthropology at the Massachusetts Institute of Technology and coeditor of Shock and Awe: War on Words.
TABLE OF CONTENTS