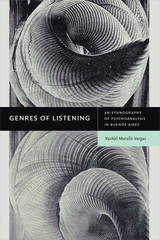 In Genres of Listening Xochitl Marsilli-Vargas explores a unique culture of listening and communicating in Buenos Aires. She traces how psychoanalytic listening circulates beyond the clinical setting to become a central element of social interaction and cultural production in the city that has the highest number of practicing psychologists and psychoanalysts in the world. Marsilli-Vargas develops the concept of genres of listening to demonstrate that hearers listen differently, depending on where, how, and to whom they are listening. In particular, she focuses on psychoanalytic listening as a specific genre. Porteños (citizens of Buenos Aires) have developed a “psychoanalytic ear” that emerges during conversational encounters in everyday interactions in which participants offer different interpretations of the hidden meaning the words carry. Marsilli-Vargas does not analyze these interpretations as impositions or interruptions but as productive exchanges. By outlining how psychoanalytic listening operates as a genre, Marsilli-Vargas opens up ways to imagine other modes of listening and forms of social interaction.
AUTHOR BIOGRAPHY
Xochitl Marsilli-Vargas is Assistant Professor in the Department of Spanish and Portuguese at Emory University.
REVIEWS
"Marsilli-Vargas’s book is an exemplary ethnography, weaving together rich empirical materials with a deeply contextualised case-study to develop novel theoretical insights on a topic of central concern to Sound Studies. . . . Marsilli-Vargas develops important conceptual tools for a nuanced understanding of listening while making a significant contribution to fields such cultural history, Latin American Studies, and the anthropology of sound."