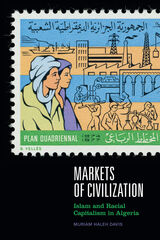 In Markets of Civilization Muriam Haleh Davis provides a history of racial capitalism, showing how Islam became a racial category that shaped economic development in colonial and postcolonial Algeria. French officials in Paris and Algiers introduced what Davis terms “a racial regime of religion” that subjected Algerian Muslims to discriminatory political and economic structures. These experts believed that introducing a market economy would modernize society and discourage anticolonial nationalism. Planners, politicians, and economists implemented reforms that both sought to transform Algerians into modern economic subjects and drew on racial assumptions despite the formally color-blind policies of the French state. Following independence, convictions about the inherent link between religious beliefs and economic behavior continued to influence development policies. Algerian president Ahmed Ben Bella embraced a specifically Algerian socialism founded on Islamic principles, while French technocrats saw Algeria as a testing ground for development projects elsewhere in the Global South. Highlighting the entanglements of race and religion, Davis demonstrates that economic orthodoxies helped fashion understandings of national identity on both sides of the Mediterranean during decolonization.
AUTHOR BIOGRAPHY
Muriam Haleh Davis is Assistant Professor of History at the University of California, Santa Cruz, and coeditor of North Africa and the Making of Europe: Governance, Institutions, and Culture.
REVIEWS

“Markets of Civilization makes for a fascinating addition both to the literature on Algeria and also to the broader literature on racial formations and racialization. . . . Well worth the read.”