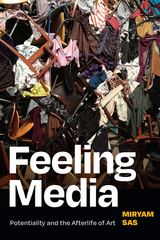 In Feeling Media Miryam Sas explores the potentialities and limitations of media theory and media art in Japan. Opening media studies and affect theory up to a deeper engagement with works and theorists outside Euro-America, Sas offers a framework of analysis she calls the affective scale—the space where artists and theorists work between the level of the individual and larger global and historical shifts. She examines intermedia, experimental animation, and Marxist theories of the culture industries of the 1960s and 1970s in the work of artists and thinkers ranging from filmmaker Matsumoto Toshio, photographer Nakahira Takuma, and the Three Animators' Group to art critic Hanada Kiyoteru and landscape theorist Matsuda Masao. She also outlines how twenty-first-century Japanese artists—especially those responding to the Fukushima disaster—adopt and adapt this earlier work to reframe ideas about collectivity, community, and connectivity in the space between the individual and the system.
AUTHOR BIOGRAPHY
Miryam Sas is Professor of Film and Media and Comparative Literature at the University of California, Berkeley, and author of Experimental Arts in Postwar Japan: Moments of Encounter, Engagement, and Imagined Return and Fault Lines: Cultural Memory and Japanese Surrealism.
TABLE OF CONTENTS


Acknowledgments  vii
Introduction  1
Part I: Intermedia and Its Potentialities
1. The Feeling of Being in the Contemporary Age: The Rise of Intermedia  29
2. Intermedia Moments in Japanese Experimental Animation  71
3. The Culture Industries and Media Theory in Japan: Transformations in Leftist Thought  110
Part II: The Afterlife of Art in Japan
4. A Feminist Phenomenology of Media: Ishiuchi Miyako  141
5. From Postwar to Contemporary Art  174
6. Moves Like Sand: Community and Collectivity in Japanese Contemporary Art  209
Conclusion: Parallax and Afterlives  242
Notes  253
Biblography  279
Index  291