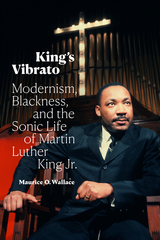 In King’s Vibrato Maurice O. Wallace explores the sonic character of Martin Luther King Jr.’s voice and its power to move the world. Providing a cultural history and critical theory of the black modernist soundscapes that helped inform King’s vocal timbre, Wallace shows how the qualities of King’s voice depended on a mix of ecclesial architecture and acoustics, musical instrumentation and sound technology, audience and song. He examines the acoustical architectures of the African American churches where King spoke and the centrality of the pipe organ in these churches, offers a black feminist critique of the influence of gospel on King, and outlines how variations in natural environments and sound amplifications made each of King’s three deliveries of the “I Have a Dream” speech unique. By mapping the vocal timbre of one of the most important figures of black hope and protest in American history, Wallace presents King as the embodiment of the sound of modern black thought.
AUTHOR BIOGRAPHY
Maurice O. Wallace is Associate Professor of English at Rutgers University–New Brunswick, author of Constructing the Black Masculine: Identity and Ideality in African American Men’s Literature and Culture, 1775–1995, and coeditor of Pictures of Progress: Early Photography and the Making of African American Identity, both also published by Duke University Press.
TABLE OF CONTENTS