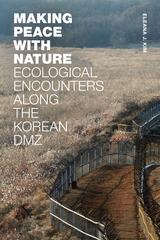 The Korean Demilitarized Zone (DMZ) has been off-limits to human habitation for nearly seventy years, and in that time, biodiverse forms of life have flourished in and around the DMZ as beneficiaries of an unresolved war. In Making Peace with Nature Eleana J. Kim shows how a closer examination of the DMZ in South Korea reveals that the area’s biodiversity is inseparable from scientific practices and geopolitical, capitalist, and ecological dynamics. Drawing on ethnographic fieldwork with ecologists, scientists, and local residents, Kim focuses on irrigation ponds, migratory bird flyways, and land mines in the South Korean DMZ area, demonstrating how human and nonhuman ecologies interact and transform in spaces defined by war and militarization. In so doing, Kim reframes peace away from a human-oriented political or economic peace and toward a more-than-human, biological peace. Such a peace recognizes the reality of war while pointing to potential forms of human and nonhuman relations.
AUTHOR BIOGRAPHY
Eleana J. Kim is Associate Professor of Anthropology at the University of California, Irvine, and author of Adopted Territory: Transnational Korean Adoptees and the Politics of Belonging, also published by Duke University Press.
TABLE OF CONTENTS