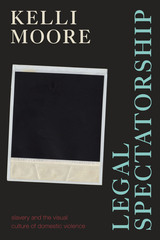 In Legal Spectatorship Kelli Moore traces the political origins of the concept of domestic violence through visual culture in the United States. Tracing its appearance in Article IV of the Constitution, slave narratives, police notation, cybernetic theories of affect, criminal trials, and the “look” of the battered woman, Moore contends that domestic violence refers to more than violence between intimate partners—it denotes the mechanisms of racial hierarchy and oppression that undergird republican government in the United States. Moore connects the use of photographic evidence of domestic violence in courtrooms, which often stands in for women’s testimony, to slaves’ silent experience and witnessing of domestic abuse. Drawing on Harriet Jacobs’s Incidents in the Life of a Slave Girl, abolitionist print culture, courtroom witness testimony, and the work of Hortense Spillers, Moore shows how the logic of slavery and antiblack racism also dictates the silencing techniques of the contemporary domestic violence courtroom. By positioning testimony on contemporary domestic violence prosecution within the archive of slavery, Moore demonstrates that domestic violence and its image are haunted by black bodies, black flesh, and black freedom.