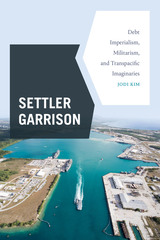 In Settler Garrison Jodi Kim theorizes how the United States extends its sovereignty across Asia and the Pacific in the post-World War II era through a militarist settler imperialism that is leveraged on debt as a manifold economic and cultural relation undergirded by asymmetries of power. Kim demonstrates that despite being the largest debtor nation in the world, the United States positions itself as an imperial creditor that imposes financial and affective indebtedness alongside a disciplinary payback temporality even as it evades repayment of its own debts. This debt imperialism is violently reproduced in juridically ambiguous spaces Kim calls the “settler garrison”: a colonial archipelago of distinct yet linked military camptowns, bases, POW camps, and unincorporated territories situated across the Pacific from South Korea to Okinawa to Guam. Kim reveals this process through an analysis of how a wide array of transpacific cultural productions creates antimilitarist and decolonial imaginaries that diagnose US militarist settler imperialism while envisioning alternatives to it.
AUTHOR BIOGRAPHY
Jodi Kim is Associate Professor of Media and Cultural Studies at the University of California, Riverside; coeditor of Critical Ethnic Studies: A Reader, also published by Duke University Press; and author of Ends of Empire: Asian American Critique and the Cold War.
REVIEWS
“Settler Garrison is a stunning, magisterial work that provides an entirely original definition of US empire as predicated on the production of its legitimation to wield power. Jodi Kim frames spaces heretofore deemed anomalous or marginal—the camptown, the POW camp, and the unincorporated territory—as the very sites where US empire establishes its authority to rule. In the process of redefining and reframing US empire, Kim offers a unique and sorely needed relational methodology for understanding the connection between its various modes, in particular between military empire and settler colonialism."

-- Grace Kyungwon Hong, author of Death beyond Disavowal: The Impossible Politics of Difference
TABLE OF CONTENTS