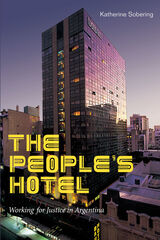 In 2001 Argentina experienced a massive economic crisis: businesses went bankrupt, unemployment spiked, and nearly half the population fell below the poverty line. In the midst of the crisis, Buenos Aires’s iconic twenty-story Hotel Bauen quietly closed its doors, forcing longtime hospitality workers out of their jobs. Rather than leaving the luxury hotel vacant, a group of former employees occupied the property and kept it open. In The People’s Hotel, Katherine Sobering recounts the history of the Hotel Bauen, detailing its transformation from a privately owned business into a worker cooperative—one where decisions were made democratically, jobs were rotated, and all members were paid equally. Combining ethnographic and archival research with her own experiences as a volunteer worker at the hotel, Sobering examines how the Bauen Cooperative grew and, against all odds, successfully kept the hotel open for nearly two decades. Highlighting successes and innovations alongside the many challenges that these workers faced, Sobering presents a vivid portrait of efforts to address inequality and reorganize work in a capitalist economy.
AUTHOR BIOGRAPHY
Katherine Sobering is Assistant Professor of Sociology at the University of North Texas and coauthor of The Ambivalent State: Police-Criminal Collusion at the Urban Margins.
TABLE OF CONTENTS