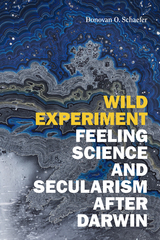 In Wild Experiment, Donovan O. Schaefer challenges the conventional wisdom that feeling and thinking are separate. Drawing on science studies, philosophy, affect theory, secularism studies, psychology, and contemporary literary criticism, Schaefer reconceptualizes rationality as defined by affective processes at every level. He introduces the model of “cogency theory” to reconsider the relationship between evolutionary biology and secularism, examining mid-nineteenth-century Darwinian controversies, the 1925 Scopes Trial, and the New Atheist movement of the 2000s. Along the way, Schaefer reappraises a range of related issues, from secular architecture at Oxford to American eugenics to contemporary climate denialism. These case studies locate the intersection of thinking and feeling in the way scientific rationality balances excited discovery with anxious scrutiny, in the fascination of conspiracy theories, and in how racist feelings assume the mantle of rational objectivity. The fact that cognition is felt, Schaefer demonstrates, is both why science succeeds and why it fails. He concludes that science, secularism, atheism, and reason itself are not separate from feeling but comprehensively defined by it.
AUTHOR BIOGRAPHY
Donovan O. Schaefer is Assistant Professor of Religious Studies at the University of Pennsylvania and author of Religious Affects: Animality, Evolution, and Power, also published by Duke University Press, and The Evolution of Affect Theory: The Humanities, the Sciences, and the Study of Power.
REVIEWS
“You know that jolt that arrives when everything clicks, when the pieces suddenly fit? At once heady and visceral, this experience of cogency—when lucidity emerges out of the messy thicket of experiment—is the focus of this book. From Darwinian science to conspiracy thinking to new Atheism to racialized cognition and more, Donovan O. Schaefer offers a lively account of how intellect and affect are thoroughly intertwined. Readers from several disciplines—religious studies, affect theory, critical science studies, and more—will feel themselves ‘clicking’ with surprise and delight.”


Introduction. Cogency Theory: An Essay on Our Intellectual Affects  1
Part I. Cogency Theory
1. The Longing to Believe: Philosophers on Conspiracy Theory and the Sense of Science  33
2. Sensualized Epistemology: Affect Theory on How Reason Gets Racialized  57
3. Science as an Intoxication: Secularism Studies on Enchantment and Critique  80
4. Feeling is Believing: The Triune Brain, Mere Exposure, and Cogency  107
Part II. Feeling Science and Secularism
5. Only Better Beasts: Darwin, Huxley, and the Sense of Science  137
6. The Secular Circus: Science and Racialized Reason in the Scopes Trial  169
7. The Four Horsemen: New Atheism as Secular Conspiracy Theory  200
Epilogue. From Creationism to Climate Denialism  230
Acknowledgments  239
Notes  243
Bibliography  281
Index