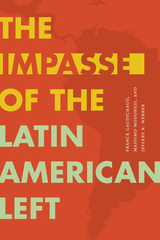 In The Impasse of the Latin American Left, Franck Gaudichaud, Massimo Modonesi, and Jeffery R. Webber explore the region’s Pink Tide as a political, economic, and cultural phenomenon. At the turn of the twenty-first century, Latin American politics experienced an upsurge in progressive movements, as popular uprisings for land and autonomy led to the election of left and center-left governments across Latin America. These progressive parties institutionalized social movements and established forms of state capitalism that sought to redistribute resources and challenge neoliberalism. Yet, as the authors demonstrate, these governments failed to transform the underlying class structures of their societies or challenge the imperial strategies of the United States and China. Now, as the Pink Tide has largely receded, the authors offer a portrait of this watershed period in Latin American history in order to evaluate the successes and failures of the left and to offer a clear-eyed account of the conditions that allowed for a right-wing resurgence.
AUTHOR BIOGRAPHY
Franck Gaudichaud is Professor of History and Latin American Studies at Universite Toulouse-Jean Jaurès.

Jeffery R. Webber is Associate Professor of Politics at York University.
REVIEWS
“The Impasse of the Latin American Left develops a persuasive, systematic periodization of complex relations between class struggles, progressivisms, the left, and popular movements from the 1990s to the present. The book successfully gives coherence to the chaotic processes of historical change across the region.”

“This book argues that antineoliberal ‘plebeian rebellions’ caused the dramatic regional shift to left-leaning governance that took place at the turn of the twenty-first century. As the pendulum swings back towards the right, Franck Gaudichaud, Massimo Modonesi, and Jeffery Webber’s The Impasse of the Latin American Left assesses to what extent ‘progressive’ governments realized the transformative aspirations of those rebellions. Their contributions are deeply anchored in work by and about Latin Americans…. This book offers cogent structural critiques of deeply structural impasses.”