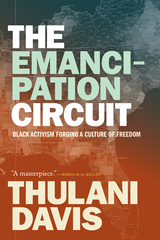 In The Emancipation Circuit Thulani Davis provides a sweeping rethinking of Reconstruction by tracing how the four million people newly freed from bondage created political organizations and connections that mobilized communities across the South. Drawing on the practices of community they developed while enslaved, freedpeople built new settlements and created a network of circuits through which they imagined, enacted, and defended freedom. This interdisciplinary history shows that these circuits linked rural and urban organizations, labor struggles, and political culture with news, strategies, education, and mutual aid. Mapping the emancipation circuits, Davis shows the geography of ideas of freedom---circulating on shipping routes, via army maneuvers, and with itinerant activists---that became the basis for the first mass Black political movement for equal citizenship in the United States. In this work, she reconfigures understandings of the evolution of southern Black political agendas while outlining the origins of the enduring Black freedom struggle from the Jim Crow era to the present.
AUTHOR BIOGRAPHY
Thulani Davis is a professor and a Nellie Y. McKay Fellow in the Afro-American Studies Department at the University of Wisconsin-Madison and author of My Confederate Kinfolk: A Twenty-first Century Freedwoman Discovers Her Roots. A poet and longtime writer for theater, film, and journalism, Davis has been a recipient of a Lila Wallace-Readers Digest Writers Award, a PEW Foundation National Theatre Artist Residency, and a Charles H. Revson Fellowship on the Future of New York City.
REVIEWS
“In this spectacular book Thulani Davis presents a framework for not only rewriting the Civil War and Reconstruction, but for understanding the entire history of the Black freedom movement extending into the twentieth century. As groundbreaking as W. E. B. Du Bois’s Black Reconstruction, The Emancipation Circuit is a masterpiece.”

"The Emancipation Circuit offers a powerful reimagining of the networks that helped to secure Black freedom during the Civil War and Reconstruction: It is a history about enslaved people’s efforts to free themselves and about their local struggles to give substance to their legal emancipation, as well as a mapping of the geography that enabled their achievements and the circuits that spread their political goals like pollen in the wind. . . . The Emancipation Circuit reminds today’s activists that any organizing for Black freedom must be multifaceted and must pursue local aims while traveling along preexisting networks to become a broader collective effort."

"Thulani Davis’s The Emancipation Circuit is an important contribution to Black social and political thought that helps center Black women and Black resistance of United States history and social movements."