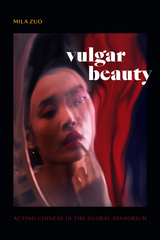 In Vulgar Beauty Mila Zuo offers a new theorization of cinematic feminine beauty by showing how mediated encounters with Chinese film and popular culture stars produce feelings of Chineseness. To illustrate this, Zuo uses the vulgar as an analytic to trace how racial, gendered, and cultural identity is imagined and produced through affect. She frames the vulgar as a characteristic that is experienced through the Chinese concept of weidao, or flavor, in which bitter, salty, pungent, sweet, and sour performances of beauty produce non-Western forms of sexualized and racialized femininity. Analyzing contemporary film and media ranging from actress Gong Li’s post-Mao movies of the late 1980s and 1990s to Joan Chen’s performance in Twin Peaks to Ali Wong’s stand-up comedy specials, Zuo shows how vulgar beauty disrupts Western and colonial notions of beauty. Vulgar beauty, then, becomes the taste of difference. By demonstrating how Chinese feminine beauty becomes a cinematic invention invested in forms of affective racialization, Zuo makes a critical reconsideration of aesthetic theory.
AUTHOR BIOGRAPHY
Mila Zuo is Assistant Professor of Cinema and Media Studies at the University of British Columbia.
REVIEWS
“In this gorgeously written book, Mila Zuo captures how Chinese female film stars perform beauty in ways that reflect their negotiation with the racial sexualization of their femininity. With a rigorous and lucid ferocity, Zuo boldly brings together critical theory, philosophy, aesthetics, women of color feminism, feminist film theory, and performance theory to help us understand Chinese women’s presences on screen. Fearless and powerful, Vulgar Beauty is a pleasure to read.”

-- Celine Parreñas Shimizu, author of The Proximity of Other Skins: Ethical Intimacy in Global Cinema

"[Zuo's] metaphoric language, mostly revolving around food, offers the reader not only an intellectual exploration of the power of vulgar beauty to destabilize racial and patriarchal power structures but also a flavorful and aesthetic journey in and of itself."