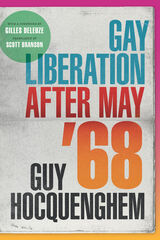 In Gay Liberation after May ’68, first published in France in 1974 and appearing here in English for the first time, Guy Hocquenghem details the rise of the militant gay liberation movement alongside the women’s movement and other revolutionary organizing. Writing after the apparent failure and eventual selling out of the revolutionary dream of May 1968, Hocquenghem situates his theories of homosexual desire in the realm of revolutionary practice, arguing that revolutionary movements must be rethought through ideas of desire and sexuality that undo stable gender and sexual identities. Throughout, he persists in a radical vision of the world framed through a queerness that can dismantle the oppressions of capitalism and empire, the family, institutions, and, ultimately, civilization. The articles, communiques, and manifestos that compose the book give an archival glimpse at the issues queer revolutionaries faced while also speaking to today’s radical queers as they look to transform their world.
AUTHOR BIOGRAPHY
Guy Hocquenghem (1946–88) taught philosophy at the University of Vincennes, Paris. An activist and pioneering queer theorist, he was the author of many books, including Homosexual Desire, also published by Duke University Press, as well as a staff writer for the French publication Libération and a founding member of the Front homosexuel d'action révolutionnaire.

Gilles Deleuze (1925–95) was one of the most influential and prolific philosophers of the twentieth century.

Scott Branson is a writer and translator who teaches at Appalachian State University.
REVIEWS
“A wind of revolution sweeps through these pages, which bring the radical thought of influential French gay liberationist Guy Hocquenghem to Anglophone readers. Gay Liberation after May ’68 anticipates both queer and trans theory by refusing every politics of respectability in order to theorize a radical transversalism that dissolves all identities, corrodes all institutions, and sweeps away ‘civilization’ itself in favor of a better world to come.”

“An immense gift to queer theory, Gay Liberation after May ’68 promises to bring a new generation of English-language readers to Guy Hocquenghem; these readers can use this text as a blueprint for activism to interrupt and hopefully dismantle the gross structural inequities that shape our present world.”