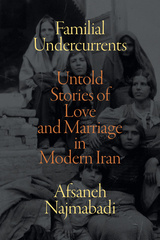 Not long after her father died, Afsaneh Najmabadi discovered that her father had a secret second family and that she had a sister she never knew about. In Familial Undercurrents, Najmabadi uncovers her family’s complex experiences of polygamous marriage to tell a larger story of the transformations of notions of love, marriage, and family life in mid-twentieth-century Iran. She traces how the idea of “marrying for love” and the desire for companionate, monogamous marriage acquired dominance in Tehran’s emerging urban middle class. Considering the role played in that process by late nineteenth- and early twentieth-century romance novels, reformist newspapers, plays, and other literature, Najmabadi outlines the rituals and objects---such as wedding outfits, letter writing, and family portraits---that came to characterize the ideal companionate marriage. She reveals how in the course of one generation men’s polygamy had evolved from an acceptable open practice to a taboo best kept secret. At the same time, she chronicles the urban transformations of Tehran and how its architecture and neighborhood social networks both influenced and became emblematic of the myriad forms of modern Iranian family life.
AUTHOR BIOGRAPHY
Afsaneh Najmabadi is Francis Lee Higginson Professor of History and of Studies of Women, Gender, and Sexuality at Harvard University and author of Professing Selves: Transsexuality and Same-Sex Desire in Contemporary Iran, also published by Duke University Press, and Women with Mustaches and Men Without Beards: Gender and Sexual Anxieties of Iranian Modernity.
REVIEWS
“Afsaneh Najmabadi’s creative mélange of history and memoir makes a compelling case for microhistory and even more specifically for personal history as a living document and an archive to be explored in uncovering Iranian social history. I greatly appreciate how Najmabadi has brought history to life.”

-- Firoozeh Kashani-Sabet, author of Conceiving Citizens: Women and the Politics of Motherhood in Iran

“Few scholars elevate the personal to the theoretical with the economy and elegance of Afsaneh Najmabadi. She translates a claim that her father had a secret second family into a journey of research, producing exquisite reflections on urban/space transformations that facilitated familial change. Stories are not just stories, as Najmabadi interrogates them to extract and advance their enduring theoretical significance. She sweeps into history and history making.”

-- Suad Joseph, general editor of the Encyclopedia of Women and Islamic Cultures