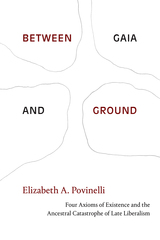 In Between Gaia and Ground Elizabeth A. Povinelli theorizes the climatic, environmental, viral, and social catastrophe present as an ancestral catastrophe through which that Indigenous and colonized peoples have been suffering for centuries. In this way, the violence and philosophies the West relies on now threaten the West itself. Engaging with the work of Glissant, Deleuze and Guattari, Césaire, and Arendt, Povinelli highlights four axioms of existence—the entanglement of existence, the unequal distribution of power, the collapse of the event as essential to political thought, and the legacies of racial and colonial histories. She traces these axioms' inspiration in anticolonial struggles against the dispossession and extraction that have ruined the lived conditions for many on the planet. By examining the dynamic and unfolding forms of late liberal violence, Povinelli attends to a vital set of questions about changing environmental conditions, the legacies of violence, and the limits of inherited Western social theory. Between Gaia and Ground also includes a glossary of the keywords and concepts that Povinelli has developed throughout her work.
AUTHOR BIOGRAPHY
Elizabeth A. Povinelli is Franz Boas Professor of Anthropology and Gender Studies at Columbia University and founding member of the Karrabing Film Collective. Her most recent book is The Inheritance, also published by Duke University Press.
REVIEWS
“Engaging with modern philosophy’s original problem of how to ground truth (approached in ontological terms) within the limits of human existence (delimited in historical terms), Between Gaia and Ground proposes a starting point for thinking about the capitalist present that foregrounds precisely what pre- and post-Enlightenment European thinkers have consistently foreclosed. Locating colonial and racial power at the core of the thinking of existence, Elizabeth A. Povinelli provides an urgently needed corrective to contemporary critical theorizing's insistence on ignoring its existential conditions of emergence (thought in political terms).”

“Between Gaia and Ground not only extends the trajectory of Elizabeth A. Povinelli’s pathbreaking work, it participates in a highly promising movement to unsettle disciplines and narrative genres in the aftermath of global capital, militarism, and accelerating environmental destruction. Provocative and timely.”

-- Joseph Masco, author of The Future of Fallout, and Other Episodes in Radioactive World-Making

“Drawing on wide-ranging intellectual and political itineraries, Between Gaia and Ground offers a provoking way to theorize environmental violence that will be sure to attract and stir up readers.”

-- Michelle Murphy, author of The Economization of Life

"One of the book’s greatest contributions is that it generates dialogue between a significant part of prevailing critical theory and the issue of power. This is achieved through detailed attention to the implications of the task of analysis and development of concepts for understanding social processes and seeking transformations to situations of violence and injustice. This could be useful not only in academic contexts, but also in struggles in which indigenous peoples, Afro-Americans, and other excluded groups participate."

"Ambitious in scope and far-reaching in its critique, Povinelli’s Between Gaia and Ground offers invaluable insights toward a decolonial environmental theory that can inspire more just ecological practices. It will undoubtedly shape future discussions across many fields."