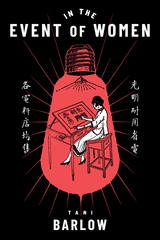 In the Event of Women outlines the stakes of what Tani Barlow calls “the event of women.” Focusing on the era of the late nineteenth century through the mid-twentieth century's Cultural Revolution, Barlow shows that an event is a politically inspired action to install a newly discovered truth, in this case the mammal origins of human social evolution. Highbrow and lowbrow social theory circulating in Chinese urban print media placed humanity's origin story in relation to commercial capital's modern advertising industry and the conclusion that women's liberation involved selling, buying, and advertising industrial commodities. The political struggle over how the truth of women in China would be performed and understood, Barlow shows, means in part that an event of women was likely global because its truth is vested in biology and physiology. In so doing, she reveals the ways in which historical universals are effected in places where truth claims are not usually sought. This book reconsiders Alain Badiou's concept of the event; particularly the question of whose political moment marks newly discovered truths.
AUTHOR BIOGRAPHY
Tani Barlow is George and Nancy Rupp Professor of Humanities and Professor of History at Rice University and the founding senior editor of positions: asia critique. She is the author and editor of many books and journal issues, including The Question of Women in Chinese Feminism, The Modern Girl around the World, and New Asian Marxisms, all also published by Duke University Press.
REVIEWS
“This book presents a glorious rethinking of the historical and theoretical relation established between ‘women’ and social ‘truth’ as a universal but also specifically Chinese ‘event’ of the nineteenth and twentieth centuries. Tani Barlow dissects complexity with forensic precision. In exceptionally clear exposition, she invites us to account for our present through a rigorous analysis of concepts, histories, and the theories of human and female life spun therefrom. Illuminating and essential.”

“Shifting critical focus from area studies and nation, this alluringly erudite book theorizes capital and intellectual history to recenter modern China on the event of women. Tani Barlow positions her delightful reading of hundreds of gendered advertising images as harbingers of Chinese twentieth-century cultural life while reviving exciting Chinese traditions of feminist sociology and political thought. A provocative and creative study, In the Event of Women brings previous approaches to sinology into destabilizing dialogue with broader debates in intellectual history, visual studies, and feminism.”