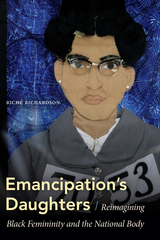 In Emancipation's Daughters, Riché Richardson examines iconic black women leaders who have contested racial stereotypes and constructed new national narratives of black womanhood in the United States. Drawing on literary texts and cultural representations, Richardson shows how five emblematic black women—Mary McLeod Bethune, Rosa Parks, Condoleezza Rice, Michelle Obama, and Beyoncé—have challenged white-centered definitions of American identity. By using the rhetoric of motherhood and focusing on families and children, these leaders have defied racist images of black women, such as the mammy or the welfare queen, and rewritten scripts of femininity designed to exclude black women from civic participation. Richardson shows that these women's status as national icons was central to reconstructing black womanhood in ways that moved beyond dominant stereotypes. However, these formulations are often premised on heteronormativity and exclude black queer and trans women. Throughout Emancipation's Daughters, Richardson reveals new possibilities for inclusive models of blackness, national femininity, and democracy.
AUTHOR BIOGRAPHY
Riché Richardson is Associate Professor of Africana Studies at Cornell University and author of Black Masculinity and the U.S. South: From Uncle Tom to Gangsta.
REVIEWS
“The women Riché Richardson examines broaden notions of black womanhood in opposition to the dominant imagery perpetuated by filmmakers, advertisers, and other cultural producers in the United States. This broad spectrum of black womanhood from the early twentieth century to the present allows Richardson to make an expansive argument about the role of these women in the broader American imaginary. The idea of black women as mothers of the nation outside of the mammy role is a powerful one that has not been framed in the way Richardson does here. Emancipation's Daughters is an engaging and important book.”

-- Lisa B. Thompson, author of Beyond the Black Lady: Sexuality and the New African American Middle Class

“Riché Richardson has given our tumultuous American moment a brilliant gift. Emancipation’s Daughters is an impeccably crafted guide to the struggles, creativity, and iconic labors of African American mothers and their emancipated daughters.”

"Richardson employs a diversity of resources throughout, including political speeches, artistic images and photos, memorials and monuments, biographies and autobiographies, and literary works to consider how Black women leaders have redefined or advanced a notion of American selfhood that is different from the national story of the 'founding fathers.' . . . Throughout the book, Richardson nicely complements the text with images to illustrate her case studies and overall thesis. Recommended. Advanced undergraduates through faculty."


Preface ix
Acknowledgments  xxi
Introduction: An Exemplary American Woman  1
1. Mary McLeod Bethune's "My Last Will and Testament" and Her National Legacy  39
2. From Rosa Parks's Quiet Strength to Memorializing a National Mother  87
3. America's Chief Diplomat: The Politics of Condoleezza Rice from Autobiography to Art and Fashion  128
4. First Lady and "Mom-in-Chief": The Voice and Vision of Michelle Obama in the Video South Side Girl and in American Grown  178
Conclusion: Beyoncé's South and the Birth of a "Formation" Nation  220
Notes  235
Bibliography  257
Index  281