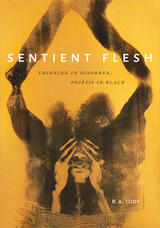 In Sentient Flesh R. A. Judy takes up freedman Tom Windham’s 1937 remark “we should have our liberty 'cause . . . us is human flesh" as a point of departure for an extended meditation on questions of the human, epistemology, and the historical ways in which the black being is understood. Drawing on numerous fields, from literary theory and musicology, to political theory and phenomenology, as well as Greek and Arabic philosophy, Judy engages literary texts and performative practices such as music and dance that express knowledge and conceptions of humanity appositional to those grounding modern racialized capitalism. Operating as critiques of Western humanism, these practices and modes of being-in-the-world—which he theorizes as “thinking in disorder,” or “poiēsis in black”—foreground the irreducible concomitance of flesh, thinking, and personhood. As Judy demonstrates, recognizing this concomitance is central to finding a way past the destructive force of ontology that still holds us in thrall. Erudite and capacious, Sentient Flesh offers a major intervention in the black study of life.
AUTHOR BIOGRAPHY
R. A. Judy is Professor of Critical and Cultural Studies at the University of Pittsburgh and author of (Dis)forming the American Canon: African-Arabic Slave Narratives and the Vernacular.
REVIEWS
“Sentient Flesh constitutes a unique and emphatic announcement of what a certain fundamental strain of black studies has long been—the disruptive turning and overturning of the ontological, metaphysical, and epistemological foundations of the modern world. Its extreme and profound generativity is bracing and invigorating, and it forces and allows its readers to do more, confront more, read more, and think more. I love this book, I feel this book, I am pleased by this book because I am undone and disturbed and disrupted and transported by this book.”

“Weaving a clear and critical story about the making of the so-called Negro and how this making is deeply connected to questions of the flesh not the body, R. A. Judy makes one of the most critical arguments in contemporary humanities. Sentient Flesh is well placed to make a major intervention.”

“This text is nothing if not a call for communal forms of thinking.... R.A. Judy has presented us with an opening to consider and reconsider what it means to be Black in this world and I hope it is a challenge that is taken up and serves to enrich the archive of Black Radical Thought.”