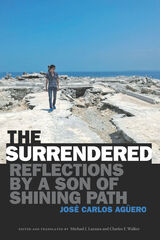 When Peruvian public intellectual José Carlos Agüero was a child, the government imprisoned and executed his parents, who were members of Shining Path. In The Surrendered—originally published in Spanish in 2015 and appearing here in English for the first time—Agüero reflects on his parents' militancy and the violence and aftermath of Peru's internal armed conflict. He examines his parents' radicalization, their lives as guerrillas, and his tumultuous childhood, which was spent in fear of being captured or killed, while grappling with the complexities of public memory, ethics and responsibility, human rights, and reconciliation. Much more than a memoir, The Surrendered is a disarming and moving consideration of what forgiveness and justice might mean in the face of hate. This edition includes an editors' introduction, a timeline of the Peruvian conflict, and an extensive interview with the author.
AUTHOR BIOGRAPHY
José Carlos Agüero is an essayist, poet, and public intellectual as well as the author and coeditor of several books in Spanish.

Michael J. Lazzara is Professor of Latin American Literature and Cultural Studies at the University of California, Davis.

Charles F. Walker is Professor of History and Director of the Hemispheric Institute on the Americas at the University of California, Davis.
REVIEWS
“José Carlos Agüero offers a rare, fragmented yet fluid memoir that is at once searing, loving, and analytically adept. The Surrendered challenges readers to approach the violence, atrocities, and loss of Peru's final decades of the twentieth century with openness and at least a modicum of compassion. Agüero seeks a fundamental sense of right and wrong while laying bare the failures of the language of victors and vanquished, perpetrators and victims.”

“José Carlos Agüero is the first author to personalize and humanize the psychological impact of political violence on Peruvian society. Powerful and beautifully written, The Surrendered is at once literary, autoethnographic, and historical. It is a one-stop shop for anyone interested in learning about the complexities and human consequences of the Peruvian armed conflict. A tour de force.”

-- Miguel La Serna, coauthor of The Shining Path: Love, Madness, and Revolution in the Andes

"Through his personal history as the child of radicals who 'decided to risk their lives in a war no one had declared against them' [Agüero] explores the ethical complexities of the conflict’s aftermath with a sensitivity and subtlety that will make his book a valuable resource for anyone studying conflict resolution and reconciliation."

“The Surrendered is a significant contribution to memory studies, human rights, and an indispensable book for scholars of Peru’s past and present. . . . The universal themes within the book widen the scope of its impact for understanding post-conflict societies and the humanity of victims.”

“[The Surrendered] is a thoughtful and thought-provoking book. . . . It is hard to put down.”