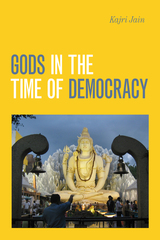 In 2018 India's prime minister, Narendra Modi, inaugurated the world's tallest statue: a 597-foot figure of nationalist leader Sardar Patel. Twice the height of the Statue of Liberty, it is but one of many massive statues built following India's economic reforms of the 1990s. In Gods in the Time of Democracy Kajri Jain examines how monumental icons emerged as a religious and political form in contemporary India, mobilizing the concept of emergence toward a radical treatment of art historical objects as dynamic assemblages. Drawing on a decade of fieldwork at giant statue sites in India and its diaspora and interviews with sculptors, patrons, and visitors, Jain masterfully describes how public icons materialize the intersections between new image technologies, neospiritual religious movements, Hindu nationalist politics, globalization, and Dalit-Bahujan verifications of equality and presence. Centering the ex-colony in rethinking key concepts of the image, Jain demonstrates how these new aesthetic forms entail a simultaneously religious and political retooling of the “infrastructures of the sensible.”
AUTHOR BIOGRAPHY
Kajri Jain is Associate Professor of Art History and Visual Studies at the University of Toronto and author of Gods in the Bazaar: The Economies of Indian Calendar Art, also published by Duke University Press.
REVIEWS
“Instead of lamenting the lack of a progressive secular spirit, Kajri Jain offers a rich, complex, and thoroughly fascinating account of how religiosity itself is being transformed in contemporary India into a public arena of democratic politics. Combining capitalist ambition with electoral competition, the proliferation of religious statuary brings together sacred texts, technology, automobility, and numerology into a new political aesthetic of monumentalism and spectacle. Jain argues persuasively that aesthetics is constitutive of politics, often in unexpected ways.”

“Kajri Jain's extraordinary book on monumental statuary cuts across art history and visual culture. Gods and leaders are together framed within what she startlingly calls ‘the aesthetics of democracy.’ Here aesthetics as a redistributive principle generates her premise of emergence: counter-positioning of the oppressed majority, their appropriation of image, material structures, and publics within India's severely stratified society increasingly subject to fascistic Hindutva. The rise of right-wing regimes worldwide will position Jain's brilliant discourse within complex contestations on what is the aesthetics of democracy today.”

-- Geeta Kapur, author of When Was Modernism: Essays on Contemporary Cultural Practice in India

“Gods in the Time of Democracy is a complex and challenging attempt at reframing the discussion around monumental iconography in India and its diaspora.... The book is a valuable contribution to contemporary art history and religious studies.”