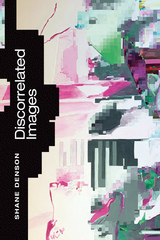 In Discorrelated Images Shane Denson examines how computer-generated digital images displace and transform the traditional spatial and temporal relationships that viewers had with conventional analog forms of cinema. Denson analyzes works ranging from the Transformers series and Blade Runner 2049 to videogames and multimedia installations to show how what he calls discorrelated images—images that do not correlate with the abilities and limits of human perception—produce new subjectivities, affects, and potentials for perception and action. Denson's theorization suggests that new media theory and its focus on technological development must now be inseparable from film and cinema theory. There's more at stake in understanding discorrelated images, Denson contends, than just a reshaping of cinema, the development of new technical imaging processes, and the evolution of film and media studies: discorrelated images herald a transformation of subjectivity itself and are essential to our ability to comprehend nonhuman agency.
AUTHOR BIOGRAPHY
Shane Denson is Associate Professor of Film and Media Studies at Stanford University and author of Postnaturalism: Frankenstein, Film, and the Anthropotechnical Interface.
REVIEWS
“Addressing some of the most important issues faced by film and media scholars today, Shane Denson gives a surprising and highly cogent account of the changes that make for our current experience of ‘postcinematic’ audiovisual media. He powerfully shows how broad socio-technological forces work in the realm of visual media and suggests ways that such media can help us to grasp the scale and effects of those forces. An important book, Discorrelated Images offers major new contributions to film and media studies.”

-- Steven Shaviro, author of The Universe of Things: On Speculative Realism

“Theoretically brilliant in its phenomenological conceptualization of discorrelation, Shane Denson's book reveals the perceptual and aesthetic discontinuities and continuities between film-based and digitally rendered cinema. Most significantly, Denson argues that understanding the effects of discorrelation and its expansion of our ways of seeing and being may provoke greater awareness of our existential precarity. A groundbreaking work.”

-- Vivian Sobchack, author of The Address of the Eye: A Phenomenology of Film Experience

"The true strength of Discorrelated Images lies in Denson’s ability to make such dramatic claims about the role of technology in reshaping human subjectivity without ever veering into crude techno-determinism, or media-effects style moral panic... [It] is highly recommended to any reader with an interest in contemporary social and media theory.”

“For anyone concerned with digital media in particular and media theory in general, Discorrelated Images is essential reading.”