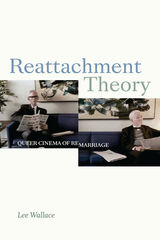 In Reattachment Theory Lee Wallace argues that homosexuality—far from being the threat to “traditional” marriage that same-sex marriage opponents have asserted—is so integral to its reimagining that all marriage is gay marriage. Drawing on the history of marriage, Stanley Cavell's analysis of Hollywood comedies of remarriage, and readings of recent gay and lesbian films, Wallace shows that queer experiments in domesticity have reshaped the affective and erotic horizons of heterosexual marriage and its defining principles: fidelity, exclusivity, and endurance. Wallace analyzes a series of films—Dorothy Arzner's Craig's Wife (1936); Tom Ford's A Single Man (2009); Lisa Cholodenko's High Art (1998), Laurel Canyon (2002), and The Kids Are All Right (2010); and Andrew Haigh's Weekend (2011) and 45 Years (2015)—that, she contends, do not simply reflect social and legal changes; they fundamentally alter our sense of what sexual attachment involves as both a social and a romantic form.
AUTHOR BIOGRAPHY
Lee Wallace is Associate Professor of Gender and Cultural Studies at the University of Sydney and author of Lesbianism, Cinema, Space: The Sexual Life of Apartments.
REVIEWS
“Gay marriage: heteronormative capture or homophobia's social cure? If Lee Wallace gets her way, we will be liberated from thinking about gay marriage in these reductive terms forever. Insightful, nervy, and unapologetic, Reattachment Theory makes a case for gay marriage as central to the history of sexual modernity.”

“Reattachment Theory is a pointed engagement with contemporary queer theory and politics, making the fresh and compelling argument that homosexuality rescripted the marriage plot long before the legalization of same-sex marriage. Lee Wallace is an extraordinarily gifted close reader who sets new terms for queer marriage debates and film theory alike.”