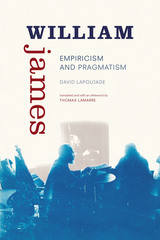 Originally published in French in 1997 and appearing here in English for the first time, David Lapoujade's William James: Empiricism and Pragmatism is both an accessible and rigorous introduction to James's thought and a pioneering rereading of it. Examining pragmatism's fundamental questions through a Deleuzian framework, Lapoujade outlines how James's pragmatism and radical empiricism encompass the study of experience and the making of reality, and he reopens the speculative side of pragmatist thought and the role of experience in it. The book includes an extensive afterword by translator Thomas Lamarre, who illustrates how James's interventions are becoming increasingly central to the contemporary debates about materialist ontology, affect, and epistemology that strive to bridge the gaps among science studies, media studies, and religious studies.
AUTHOR BIOGRAPHY
David Lapoujade is Professor of Philosophy at Université Paris 1, Panthéon-Sorbonne, and the author of numerous books, including Powers of Time: Versions of Bergson and Aberrant Movements: The Philosophy of Gilles Deleuze.

Thomas Lamarre is Professor of Asian and Middle Eastern Studies at Duke University and author of The Anime Ecology: A Genealogy of Television, Animation, and Game Media.
REVIEWS
“David Lapoujade's book, at last translated, was an event in France, and so it will be for his American readers, who will rediscover what they thought they knew. Lapoujade does not write about William James but rather embraces the movement of James's thought, performing it as a musician performs a score, making it alive and audible for its own sake and enabling his readers to go back and read James as if for the first time.”

“In this crisp, well-argued book, David Lapoujade rescues the whole idea of pragmatism from the dismissive and misguided views that it is an ‘American’ philosophy by recasting its fundamental questions along new lines. He advances a vision of pragmatism that is based in trust in the world of things in the making, in effect reopening pragmatist thought from a fresh angle.”

“Originally published in French in 1997 and finally translated into English, David Lapoujade's William James is varnished by the specter of Deleuzean transcendental empiricism.... William James is as much an archeological disinterring of Deleuze by way of James as it is a recovery of James’s pragmatism from Richard Rorty’s neo-pragmatism....”

“[William James] is well written, with a verve that will repay the attentive reader. Recommended.”

“For those attentive to connection, who seek to multiply relations, [William James] will prove instructive through its experimentation with the prospective possibilities of a philosopher’s thought. As Lapoujade performatively reminds us, every act of interpretation is also an act of creation.”