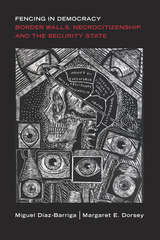 Border walls permeate our world, with more than thirty nation-states constructing them. Anthropologists Margaret E. Dorsey and Miguel Díaz-Barriga argue that border wall construction manifests transformations in citizenship practices that are aimed not only at keeping migrants out but also at enmeshing citizens into a wider politics of exclusion. For a decade, the authors studied the U.S.-Mexico border wall constructed by the Department of Homeland Security and observed the political protests and legal challenges that residents mounted in opposition to the wall. In Fencing in Democracy Dorsey and Díaz-Barriga take us to those border communities most affected by the wall and often ignored in national discussions about border security to highlight how the state diminishes citizens' rights. That dynamic speaks to the citizenship experiences of border residents that is indicative of how walls imprison the populations they are built to protect. Dorsey and Díaz-Barriga brilliantly expand conversations about citizenship, the operation of U.S. power, and the implications of border walls for the future of democracy.
AUTHOR BIOGRAPHY
Margaret E. Dorsey is Associate Professor of Sociology and Anthropology at the University of Richmond.

Miguel Díaz-Barriga is Professor of Sociology and Anthropology at the University of Richmond.
REVIEWS
“Miguel Díaz-Barriga and Margaret E. Dorsey's argument that the role of the state in fomenting violence remains unrecognized and depoliticized is powerful and utterly convincing. With its superior scholarship and compelling ethnographic material, Fencing in Democracy will garner interest from scholars and the public alike.”

-- Patricia Zavella, author of I’m Neither Here nor There: Mexicans’ Quotidian Struggles with Migration and Poverty

“Miguel Díaz-Barriga and Margaret E. Dorsey deliver a groundbreaking exposé of the distorted logics, policies, and politics that underpin the construction of border walls. Focusing on the US-Mexico border wall, Fencing in Democracy is a deeply thoughtful and thoroughly researched investigation that reveals the backstories behind ever-expanding processes of securitization and militarization, and the death and destruction that result. Not for the fainthearted, this book is for concerned citizens of the world looking to comprehend what the popular media and powerful politicians distort and a wake-up call about what gets destroyed in the name of safety.”

-- Alisse Waterston, author of My Father’s Wars: Migration, Memory, and the Violence of a Century

“This work is provocative.... Given the global rise of authoritarian rule coupled with the imposition of walls of exclusion, Fencing in Democracy will be of interest globally to general publics and students across the social sciences.”

“[Fencing in Democracy] is an extremely valuable study of the local dynamics and resistance to the federal and state multilayered border enforcement machine and propaganda.”