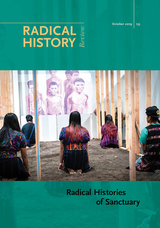 Radical Histories of Sanctuary
edited by A. Naomi Paik, Jason Ruiz and Rebecca Schreiber
Duke University Press, 2019
Paper: 978-1-4780-0524-7
In “Radical Histories of Sanctuary,” contributors explore both contemporary and historical invocations of “sanctuary,” paying particular attention to its genealogies in social movements against state violence. Expanding the scope of sanctuary, they address not only immigrant activism but also topics such as indigenous strategies of survival in the Americas, gay liberation in rural spaces, and urban housing for refugees. The essays contest liberal conventions of sanctuary that shore up the very forms of power and subjugation they seek to dismantle: from immigrant movements affirming the distinction between “good” and “bad” immigrants to gay liberation movements for police reform that fail to address the fundamental violence of policing. Examining both the liberatory potential of sanctuary and its limits, the contributors argue for intersectional strategies of resistance that connect the struggles of disparate groups against repressive and violent power.

Jason Ruiz is Associate Professor of American Studies at the University of Notre Dame and author of Americans in the Treasure House: Travel to Porfirian Mexico and the Cultural Politics of Empire.

Rebecca M. Schreiber is Associate Professor of American Studies at the University of New Mexico and author of The Undocumented Everyday: Migrant Lives and the Politics of Visibility.