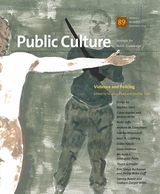 Violence and Policing
edited by Madiha Tahir and Shamus Khan
Duke University Press
Paper: 978-1-4780-0523-0
Contributors to this special issue examine the discourse and practices of policing, providing insights into how policing transforms societal relationships and develops and maintains order. Identifying parallels between police and military power, contributors argue that policing is more than merely the practice of the institution of the police but is the violence work of maintaining a specific social order. Topics covered in the essays include “speculative policing,” which attempts to control not only the present but also uncertain futures; the inextricable relation between anti-Blackness and the violence of the law; the role of police in US politics; French policing of ethno-racial minorities; the relationship between police body cameras and gender equity; and a Brazilian “exceptional prison,” which houses police who have broken the law.

Shamus Khan is the editor of Public Culture, Professor of Sociology at Columbia University, and the author of several books, including Privilege: The Making of an Adolescent Elite at St. Paul's School and The Practice of Research.