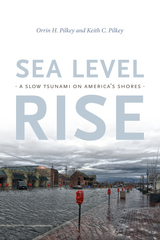 The consequences of twenty-first-century sea level rise on the United States and its nearly 90,000 miles of shoreline will be immense: Miami and New Orleans will disappear; many nuclear and other power plants, hundreds of wastewater plants and toxic waste sites, and oil production facilities will be at risk; port infrastructures will need to be raised; and over ten million Americans fleeing rising seas will become climate refugees. In Sea Level Rise Orrin H. Pilkey and Keith C. Pilkey argue that the only feasible response along much of the U.S. shoreline is an immediate and managed retreat. Among many topics, they examine sea level rise's effects on coastal ecosystems, health, and native Alaskan coastal communities. They also provide guidelines for those living on the coasts or planning on moving to or away from them, as well as the steps local governments should take to prepare for this unstoppable, impending catastrophe.
AUTHOR BIOGRAPHY
Orrin H. Pilkey is James B. Duke Professor Emeritus of Geology at Duke University and the author and coauthor of numerous books, including The Last Beach, also published by Duke University Press.

Keith C. Pilkey is an administrative law judge with the Social Security Administration. He is coauthor, with Orrin H. Pilkey, of Global Climate Change: A Primer, also published by Duke University Press.
REVIEWS
“This is a compelling history of the near-future. Read it to understand the pressures that will shape our planet as the century wears on—and read it as a reminder that we must act now to keep things from getting worse than they must.”

-- Bill McKibben, author of Falter: Has the Human Game Begun to Play Itself Out?

“For decades the Pilkeys have been unafraid to provide straight talk about the reality of our tense relationship with the coast, whether it's the nature of our highly dynamic coastal landscape, the impacts of shoreline armoring, or the reality of climate change. Here they provide a clear-eyed and sober view of America's future with rapidly rising seas and how woefully unprepared we are for what very well might be our nation's biggest challenge.”

"Sea Level Rise is written in direct, nontechnical language that’s absent of dramatic innuendo and is full of information and documentation regarding the anticipated effects of a rising sea level. Ignoring its message could have severe consequences."

"[Orrin Pilkey and Keith Pilkey] identify the legal, political and financial decisions required to cope with sea level rise as it threatens nearly every aspect of American life, including commerce and shipping, the military, tourism and the design and functioning of major cities. The sober assessment questions whether the recent trend toward building resilient coastal communities is even possible."

"[The] approach of highlighting specific communities allows the authors to effectively communicate that just as geographic regions may be differently impacted, as a function of their particular coastal morphology and through the effects of local geologic processes such as subsidence, different reactions may be generated within communities sharing specific regional cultures. . . .  Recommended. All readers."


Acknowledgments
Prologue
1. Flee the Sea: Climate Refugees
2. The End of the Inupiat Way of Life
3. Lord Willing and the Creek Don't Rise: Sunny Day Flooding
4. Dirty Waters and Worried Minds: Health Concerns in an Age of Climate Change
5. The Front Line in the Battle: The U.S. Military
6. At-Risk Coastal Environments: Is Resilience Futile?
7. The Environmental Impact of Surging Seas: Life at the Edge
8. Inundated Infrastructure: Imperiled Energy Facilities
9. Coast Catastrophes: Cities on the Brink
10. Under Water: National Flood Insurance and Climate Gentrification
11. What You Can Do about Sea Level Rise
Appendix A. Global Delta Population Displacement Potential by 2050
Appendix B. The Economic and Environmental Price of Holding the Shoreline Still with Hart Stablization
Appendix C. Living with the Shore Book Series
References
Index