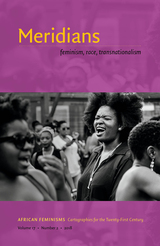 BUY
African Feminisms: Cartographies for the Twenty-First Century
edited by Alicia C. Decker and Gabeba Baderoon
Duke University Press
Paper: 978-1-4780-0497-4
This special issue, edited by the co-directors of the African Feminist Initiative (AFI) at Pennsylvania State University, is a partnership between Meridians and the AFI. The issue builds on the AFI's work to promote the study of African feminist thought and activism within the U.S. academy and to create equitable partnerships between scholars and practitioners of African feminism. Through the multiplicity of feminisms theorized in this issue, contributors challenge patriarchal ideologies and structures on myriad fronts, both on the African continent and beyond. The issue includes poetry, memoirs, essays, interviews, reflections, and testimonials on African feminisms, addressing such topics as hip hop, ethnography, secessionist movements, “saving” Nigerian girls, and women's writing.