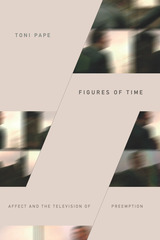 Many contemporary television series from Modern Family to How to Get Away with Murder open an episode or season with a conflict and then go back in time to show how that conflict came to be. In Figures of Time Toni Pape examines these narratives, showing how these leaps in time create aesthetic experiences of time that attune their audiences to the political doctrine of preemption—a logic that justifies preemptive action to nullify a perceived future threat. Examining questions of temporality in Life on Mars, the political ramifications of living under the auspices of a catastrophic future in FlashForward, and how Damages disrupts the logic of preemption, Pape shows how television helps shift political culture away from a model of rational deliberation and representation toward a politics of preemption and conformity. Exposing the mechanisms through which television supports a fear-based politics, Pape contends, will allow for the rechanneling of television's affective force into building a more productive and positive politics.
AUTHOR BIOGRAPHY
Toni Pape is Assistant Professor of Media Studies at the University of Amsterdam and coauthor of Nocturnal Fabulations: Ecology, Vitality, and Opacity in the Cinema of Apichatpong Weerasethakul.
REVIEWS
"Graduate students, scholars, and professions interested in media, time, and politics might find this book useful to help better understand the use of time in storytelling and its effects on politics and relatability."