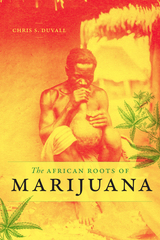 After arriving from South Asia approximately a thousand years ago, cannabis quickly spread throughout the African continent. European accounts of cannabis in Africa—often fictionalized and reliant upon racial stereotypes—shaped widespread myths about the plant and were used to depict the continent as a cultural backwater and Africans as predisposed to drug use. These myths continue to influence contemporary thinking about cannabis. In The African Roots of Marijuana, Chris S. Duvall corrects common misconceptions while providing an authoritative history of cannabis as it flowed into, throughout, and out of Africa. Duvall shows how preexisting smoking cultures in Africa transformed the plant into a fast-acting and easily dosed drug and how it later became linked with global capitalism and the slave trade. People often used cannabis to cope with oppressive working conditions under colonialism, as a recreational drug, and in religious and political movements. This expansive look at Africa's importance to the development of human knowledge about marijuana will challenge everything readers thought they knew about one of the world's most ubiquitous plants.
AUTHOR BIOGRAPHY
Chris S. Duvall is Associate Professor of Geography and Environmental Studies at the University of New Mexico and author of Cannabis.
REVIEWS
"Offers a great example of why geographers, historians, and other professionally trained humanists need to keep writing about cannabis: these are the only people who can explain and contextualize the racist and colonialist assumptions baked into much of the most widely read literature on the plant. . . . The academic literature on cannabis may never be the same after The African Roots of Marijuana."

-- Nick Johnson Points: The Blog of the Alcohol and Drugs History Society

"This book will be a worthwhile addition to any university library and is especially useful for law schools and for programs in criminology, criminal justice, sociology, and history. . . . Highly recommended. All readership levels."

"Essential reading for anyone with interests in African ethnobotany or cannabis history, and more broadly, will be of value to those interested in the history of nineteenth-century Africa or of slavery."

"The book is richly detailed and reflects years of sustained effort. . . . All in all, this is an excellent piece of scholarship. It should interest anyone with a curiosity about the history of cannabis, Africa, or the geography of drugs."

"Rumors that become published facts in high-end publications and prestigious medical journals are the mainstay of histories of marijuana. Chris S. Duvall, in a magnificently researched and clearly written book, sets right this historiography. . . . Duvall does a brilliant job in consulting available archaeological evidence, carefully studying the spread of words, and, most of all, drawing on sometimes little-studied European observers, especially Portuguese expeditions into the Central African interior. His judicious combination of all of these sources, combined with critical judgement, is convincing and a pleasure to read."

"The African Roots of Marijuana is a path-breaking work of scholarship. . . . This work represents a singular scholarly achievement, both in the history of cannabis globally and in its history on the African continent."

-- Charles Ambler Bulletin of the History of Medicine

“As African history remains on the fringe of some studies, Chris Duvall’s The African Roots of Marijuana provides a solid foundation for the agency of African people and the central function that the continent plays in the expansion of global transactions.”


Part I. Introduction: Pay Attention to African Cannabis
1. Cannabis and Africa  3
2. Race and Plant Evolution  33
Part II. Evidence: How Cannabis Came to Africa, What Happened to it There, and How It Crossed the Atlantic
3. Roots of African Cannabis Cultures  53
4. Cannabis Colonizes the Continent  72
5. A Convenient Crop  95
6. Society Overturned: The Bena Riamba  112
7. Cannabis Crosses the Atlantic  125
Part III. Discussion and Conclusions: What Carried Cannabis?
8. Working under the Influence  159
9. Buying and Banning  184
10. Rethinking Marijuana  216
Acknowledgments  231
Notes  233
Index  341