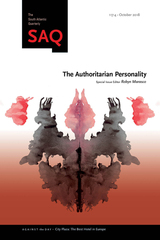 BUY
The Authoritarian Personality
edited by Robyn Marasco
Duke University Press, 2018
Paper: 978-1-4780-0355-7
In response to the recent rise of neo-fascist movements around the world, the intensification of racist violence against black and brown people, the reactionary backlash against feminism, and the crisis of neoliberal capitalism, contributors to this special issue of SAQ offer a reappraisal of The Authoritarian Personality (1950) that yields fresh insights and new resources for contemporary critique. While arguably the first major contribution to the field of political psychology, the book by Theodor W. Adorno, Else Frenkel-Brunswik, Daniel J. Levinson, and R. Nevitt Sanford has been relegated to the margins of Frankfurt School critical theory, even as an industry of scholarship has formed around Adorno's philosophical and cultural criticism. By focusing on The Authoritarian Personality and its relevance for contemporary politics, the contributors aim to correct this imbalance and assess the empirical project in early critical theory, including its integration of political sociology and social psychology.