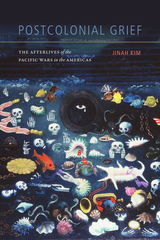 In Postcolonial Grief Jinah Kim explores the relationship of mourning to transpacific subjectivities, aesthetics, and decolonial politics since World War II. Kim argues that Asian diasporic subjectivity exists in relation to afterlives because the deaths of those killed by U.S. imperialism and militarism in the Pacific remain unresolved and unaddressed. Kim shows how primarily U.S.-based Korean and Japanese diasporic writers, artists, and filmmakers negotiate the necropolitics of Asia and how their creative refusal to heal from imperial violence may generate transformative antiracist and decolonial politics. She contests prevalent interpretations of melancholia by engaging with Frantz Fanon's and Hisaye Yamamoto's decolonial writings; uncovering the noir genre's relationship to the U.S. war in Korea; discussing the emergence of silenced colonial histories during the 1992 Los Angeles riots; and analyzing the 1996 hostage takeover of the Japanese ambassador's home in Peru. Kim highlights how the aesthetic and creative work of the Japanese and Korean diasporas offers new insights into twenty-first-century concerns surrounding the state's erasure of military violence and colonialism and the difficult work of remembering histories of war across the transpacific.
AUTHOR BIOGRAPHY
Jinah Kim is Assistant Professor of Communication Studies at California State University, Northridge.
REVIEWS
"Postcolonial Grief offers a promising glimpse into what it might look like to pursue comparative or relational area studies through an anticolonial orientation."

"Postcolonial Grief powerfully uncovers overlapping histories of violence across the Pacific and carefully considers the relationship between grief, silencing, and reconciliation. Kim convincingly demonstrates the way that melancholia and loss constitute powerful forces in the Pacific as wounds that refuse to heal yet open up new (im)possibilities for relating to violence outside of liberal humanist frameworks of reconciliation. Postcolonial Grief is thus invaluable for those interested in affect studies, settler colonial studies, cultural studies, communication, and Asian-American history."

“The book is a powerful exploration of how unmourned and unresolved deaths across the transpacific haunt the present, offering possibilities for political transformations. Analyzing the ghostly and capturing them into words is a challenging academic endeavor, which this book accomplishes robustly, making interventions across diasporic studies, critical race theories, feminist studies, cultural studies, and Asian American studies and Latinx studies.”

“In this provocative book, Jinah Kim explores the ways in which trans-Pacific victims of imperial colonial politics and militarism have navigated their relationships with decolonial politics since World War II, and the ensuing psychological transformations…. This is an important contribution, and should be read by not only students and scholars of literature and history, but also those from Asian American and East Asian studies, anthropology, sociology, and political science.”

“Postcolonial Grief covers new ground by providing a new understanding of the biopolitical regime of mourning in the Pacific and...by beautifully weaving transdisciplinary archives together to produce a richly documented and mind awakening volume.”

“In this ambitious book, Jinah Kim challenges existing geographies and conceptual frameworks by highlighting what she calls the Pacific Arena as a critical imaginative geography.... Kim succeeds in exposing liberal nation-states’ silence about the violent past.”

“Guided by comparative, relational, and critical juxtaposing perspectives, Postcolonial Grief powerfully names the interimperial complicity between U.S. and Japanese imperialisms in the Pacific and places the experiences and representations of Korean and Japanese diasporas in the Americas in conversation with other displaced and marginalized peoples.”

“In Postcolonial Grief, Kim moves skillfully to the core of the affective economy underlying Asian American studies as a growing field of research and a site of justice and equality.... This is a bold, sympathetic, and well-informed book.”

“Kim’s deft textual analysis brings into high relief the depth and breadth of grief accompanying the deferment of decolonization in certain spaces and for certain communities.... Postcolonial Grief trenchantly and persuasively shows the failures of US liberalism abroad and at home.”