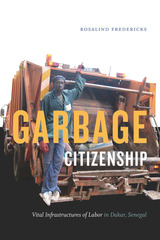 Over the last twenty-five years, garbage infrastructure in Dakar, Senegal, has taken center stage in the struggles over government, the value of labor, and the dignity of the working poor. Through strikes and public dumping, Dakar's streets have been periodically inundated with household garbage as the city's trash collectors and ordinary residents protest urban austerity. Often drawing on discourses of Islamic piety, garbage activists have provided a powerful language to critique a neoliberal mode of governing-through-disposability and assert rights to fair labor. In Garbage Citizenship Rosalind Fredericks traces Dakar's volatile trash politics to recalibrate how we understand urban infrastructure by emphasizing its material, social, and affective elements. She shows how labor is a key component of infrastructural systems and how Dakar's residents use infrastructures as a vital tool for forging collective identities and mobilizing political action. Fleshing out the materiality of trash and degraded labor, Fredericks illuminates the myriad ways waste can be a potent tool of urban control and rebellion.
AUTHOR BIOGRAPHY
Rosalind Fredericks is Associate Professor of Geography and Development Studies at New York University and coeditor of The Arts of Citizenship in African Cities: Infrastructures and Spaces of Belonging and Les arts de la citoyenneté au Sénégal: Espaces contestés et civilités urbaines.
REVIEWS
"Garbage Citizenship isn’t solely about urban rubbish collection in Senegal’s capital. The book uses waste collector strikes and activism to explore broader effects of labour relations, citizen advocacy, neoliberal reform, and religious understandings of purity and pollution."

"A powerful account of the centrality of infrastructure, waste and labor for writing larger stories of urban transformation and citizenship in Dakar and beyond."

"Garbage Citizenship powerfully details. . . how the responsibility for waste has disproportionately fallen on the urban poor."

"An engaging study of garbage infrastructure in Senegal’s capital that foregrounds both the human labor it takes to keep the city clean and the ways that failures to do so become goads to political action."

“Fredericks presents a dazzling excavation of the many strata of garbage politics. … Fredericks’s book gives us new tools for understanding how that power works.”

“Fredericks goes beyond the conventional view of waste infrastructure as capital equipment by drawing from labor studies. She expands the literature on urban citizenship by conceptualizing Dakar’s working poor as waste infrastructure whose social responsibility, political actions, and religious ideology shaped state-society relations…. [S]he provides additional lens with which to study material politics in African cities.”

“The book offers a crucial example of innovative reworking of urban governance from the South. In an age of widespread public sector cutbacks across African (and indeed global) cities, and growing labour casualization in the global North…Garbage Citizenship offers an affirmative story of labour bargaining.”

-- Tatiana A. Thieme Development and Change

"Garbage Citizenship introduce[s] the possibility of understanding political practices based on the material elements that make up the city—a huge and novel contribution…. [It] will be essential reading for those interested in urban politics and everyday life in the Global South for many years to come, just as the contentious politics of urban space will shape the contours of Africa well into the future.”