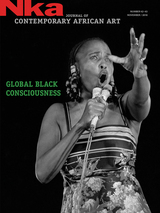 Global Black Consciousness
edited by Margo Natalie Crawford and Salah M. Hassan
Duke University Press, 2018
Paper: 978-1-4780-0097-6
Contributors to this issue of Nka complicate the key paradigms that have shaped the theories and cultural productions of the African diaspora by offering a critical and nuanced analysis of global black consciousness. Literary scholars, historians, visual art critics, and diaspora theorists explore the confluence between theories of African diaspora and theories of decolonization. They examine the intersections of visual art, literature, film, and other cultural productions alongside the crosscurrents that shaped the transnational flow of black consciousness. The contributors revisit major black and Pan-African intellectual movements and festivals in the 1960s and 1970s, including the Dakar Festival of World Negro Arts held in Dakar in 1966, the Pan-African Cultural Festival in 1969 in Algiers, and FESTAC 1977 in Lagos, Nigeria. Throughout this issue, the contributors examine both the problem and promise of mobilizing “blackness” as a unifying concept.