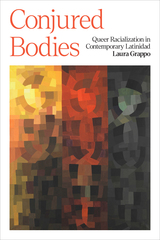 Is Latinidad a racial or an ethnic designation? Both? Neither? The increasing recognition of diversity within Latinx communities and the well-known story of shifting census designations have cast doubt on the idea that Latinidad is a race, akin to white or Black. And the mainstream media constantly cover the “browning” of the United States, as though the racial character of Latinidad were self-evident.

Many scholars have argued that the uncertainty surrounding Latinidad is emancipatory: by queering race—by upsetting assumptions about categories of human difference—Latinidad destabilizes the architecture of oppression. But Laura Grappo is less sanguine. She draws on case studies including the San Antonio Four (Latinas who were wrongfully accused of child sex abuse); the football star Aaron Hernandez’s incarceration and suicide; Lorena Bobbitt, the headline-grabbing Ecuadorian domestic-abuse survivor; and controversies over the racial identities of public Latinx figures to show how media institutions and state authorities deploy the ambiguities of Latinidad in ways that mystify the sources of Latinx political and economic disadvantage. With Latinidad always in a state of flux, it is all too easy for the powerful to conjure whatever phantoms serve their interests.

Laura Grappo is an assistant professor in the American studies department at Wesleyan University.

REVIEWS
What a book! Laura Grappo’s Conjured Bodies is the tour de force Latinx cultural studies has been waiting for. Original and elegantly written, Grappo’s book is set to shift conversations on the politics of race and sexuality in Latinx media studies, queer studies, and critical ethnic studies. With a stunning archive that takes popular media representations seriously as invaluable source material for scholarship, there is no other book quite like it.
— Richard T. Rodriguez