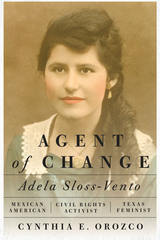 The essayist Adela Sloss-Vento (1901–1998) was a powerhouse of activism in South Texas’s Lower Rio Grande Valley throughout the Mexican American civil rights movement beginning in 1920 and the subsequent Chicano movement of the 1960s and 1970s. At last presenting the full story of Sloss-Vento’s achievements, Agent of Change revives a forgotten history of a major female Latina leader.

Bringing to light the economic and political transformations that swept through South Texas in the 1920s as ranching declined and agribusiness proliferated, Cynthia E. Orozco situates Sloss-Vento’s early years within the context of the Jim Crow/Juan Crow era. Recounting Sloss-Vento’s rise to prominence as a public intellectual, Orozco highlights a partnership with Alonso S. Perales, the principal founder of the League of United Latin American Citizens. Agent of Change explores such contradictions as Sloss-Vento’s tolerance of LULAC’s gender-segregated chapters, even though the activist was an outspoken critic of male privilege in the home and a decidedly progressive wife and mother. Inspiring and illuminating, this is a complete portrait of a savvy, brazen critic who demanded reform on both sides of the US-Mexico border.

AUTHOR BIOGRAPHY
Cynthia E. Orozco is a professor of history and humanities at Eastern New Mexico University, Ruidoso. She is the author of No Mexicans, Women, or Dogs Allowed: The Rise of the Mexican American Civil Rights Movement and coeditor of Mexican Americans in Texas History.
REVIEWS
Agent of Change presents a compelling argument that Adela Sloss-Vento deserves a place of honor in American history, especially Texas history, as a passionately persistent activist and archivist of the Mexican American civil rights and Chicano movements.
— Lone Star Literary Life

[Agent of Change] presents a timely critical investigation into one Latinx activist who shaped Texas, US, and women’s history.
— Ms. Magazine

By writing a biography of Sloss-Vento, Orozco eloquently gives readers an understanding into the everyday life of middle-class Mexican American women who have shaped community concerns into political issues. Adela Sloss-Vento’s biography is first of its kind, this book pushes the field of Latinx history to consider what women’s lives can tell about state and national debates, such as civic engagement, civil rights, and gendered expectations.
— New Books Network: Latino Studies

Superb...In Agent of Change, Cynthia E. Orozco has marshalled in-depth materials that convincingly spell out how Adela Sloss-Vento took on the powerful and proved herself to be a committed, smart, and tough servant of her people...This essential and timely book reinforces her significance to that cause and to Mexican American history.
— Southwestern Historical Quarterly

Orozco gives an outspoken, complex activist her due in this compelling biography.
— Book Riot

Agent of Change is a masterfully written biography that makes a dynamic contribution to Mexican American and Latina/o history. Thanks to Orozco’s work, historians and scholars alike can no longer omit Mexican American women’s importance to Texas and civil rights activities.
— Western Historical Quarterly

[An] impressive study of Sloss-Vento...Agent of Change gives Sloss-Vento her full due...Agent of Change breaks new ground by showcasing how a woman played a significant, if mostly unheralded, role in the movement for Mexican American equal rights…[a] compelling and splendidly researched story.
— Journalism History

A solid and retrospective review of [Adela Sloss-Vento's] life that is also a study of the Mexican American civil rights movement in Texas from 1920 to 1970 and beyond...Orozco describes her vault from obscurity to historical significance eloquently, using the events of the Mexican American and Chicano civil rights movements as steppingstones in Sloss-Vento’s career.
— Corpus Christi Caller-Times

Adela Sloss-Vento was a trailblazing Mexican American feminist and Democratic Party activist across eight decades, long before most other women of La Raza had the opportunity in Texas. Agent of Change skillfully restores this pioneering woman to her place in Latina history, making this book an invaluable and well-recommended resource for an array of disciplines.
— Chiricú Journal

This biography is a corrective and offers an example of how one might recover the lost intellectual histories of marginalized women of color in the twentieth century who sought to have their voices heard...Orozco’s book helps us get a better understanding of the not fully excavated intellectual history of Mexican Americans in the United States and is a welcome addition to Chicanx history.
— American Historical Review

[A] powerful historical chronicle of Adela Sloss-Vento’s life as a Mexican American civil rights activist and Texas feminist...Orozco has an uncanny ability for uncovering historical figures that have been excluded from the list of civil rights champions in U.S. history, and this volume gives Sloss-Vento her rightful place in the pantheon of relentless warriors...Agent of Change should be read by all interested in public and organic intellectuals...History owes a debt of gratitude to Orozco for placing Mexican American women in U.S. and Texas civil rights and women’s history.
— Journal of American History