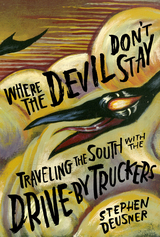 In 1996, Patterson Hood recruited friends and fellow musicians in Athens, Georgia, to form his dream band: a group with no set lineup that specialized in rowdy rock and roll. The Drive-By Truckers, as they named themselves, grew into one of the best and most consequential rock bands of the twenty-first century, a great live act whose songs deliver the truth and nuance rarely bestowed on Southerners, so often reduced to stereotypes.

Where the Devil Don’t Stay tells the band’s unlikely story not chronologically but geographically. Seeing the Truckers’ albums as roadmaps through a landscape that is half-real, half-imagined, their fellow Southerner Stephen Deusner travels to the places the band’s members have lived in and written about. Tracking the band from Muscle Shoals, Alabama, to Richmond, Virginia, to the author’s hometown in McNairy County, Tennessee, Deusner explores the Truckers’ complex relationship to the South and the issues of class, race, history, and religion that run through their music. Drawing on new interviews with past and present band members, including Jason Isbell, Where the Devil Don’t Stay is more than the story of a great American band; it’s a reflection on the power of music and how it can frame and shape a larger culture.

AUTHOR BIOGRAPHY
Stephen Deusner is a freelance music journalist whose work appears in Pitchfork, Uncut, Stereogum, No Depression, and the Bluegrass Situation, among other publications. He has contributed longform liner notes to recent reissues by Pylon and the Glands.
REVIEWS
Deusner’s must-read book follows the quintessential roots rockers as they travel through the South and the ethos that has helped define the band’s musical identity and evolution within it. Deusner...tells a story with verve and wit, and drawing on new interviews with band members past and present, he brings to vivid life the powerful ways music can shape a landscape.
— No Depression

[An] inventive biography…Rather than a straight-ahead chronological bio, Deusner takes the reader right to the places in the South that played key roles in the band and it's development...[Fans] will appreciate Deusner's history of the band, especially the early years, and the background on many of their songs.
— Houston Press

[An] excellent new book.
— Inside Hook

This is a book that you should read if you have any interest either in the Drive-By Truckers or in the current state of America.
— Americana UK

Deusner explains how [Patterson] Hood and his main Trucker foil Mike Cooley have battled to redefine rock beyond the Mason-Dixon line over the course of three decades together…Deusner's lively narrative tracks the Drive-By Truckers' evolution, picking through wrecked marriages, redneck audiences and the band's role in the making of Jason Isbell to show how the Truckers overcame a hasty choice of band name to fly the flag for a more nuanced take on good Southern manners.
— Uncut

It’s about time somebody wrote a book about the Drive-By Truckers, and what a book it is...[Where the Devil Don't Stay is] a literary, thought-provoking analysis of the dynamics behind the band’s artistry and its complicated relationship with the South.
— Atlanta Journal-Constitution

This may be the most interesting book about the South that I've read this year.
— Reckon South

The rare writer who understands the totality of the Southern experience, Stephen Deusner has created a masterwork. Exploring the forces that have shaped the music of the Drive-By Truckers, this book stands as a definitive band biography and insightful regional history, as well as an exploration and deconstruction of our most powerful American myths.
— Bob Mehr, author of the New York Times bestseller Trouble Boys: The True Story of the Replacements

Deusner’s multilayered book is so much more than a musical biography. His deeply researched dive into the Drive-By Truckers’ lengthy career encompasses the perseverance of America’s indie musicians while providing a thoughtful, evocative look at the group’s Southern roots, which imbue their artistry with its singularity. The excellent analysis of DBTs’ songcraft complements the rich storytelling, filled with unforgettable characters populating those songs – and the Truckers’ lives.
— Holly George-Warren, author of A Man Called Destruction: The Life and Music of Alex Chilton and Janis: Her Life and Music

Some of the happiest nights of my life have been spent — drunk, but fortunately not dead or naked — at Drive-By Truckers shows. In Where The Devil Don't Stay, Stephen Deusner puts this magnificent band in its proper context as a cultural, political, and above all rock 'n' roll force of nature. I wish it were possible to turn a book up to 11, because this one deserves to be blasted at full volume.
— Steven Hyden, author of Twilight of the Gods and This Isn't Happening: Radiohead's Kid A and the Beginning of the 21st Century

[Where the Devil Don't Stay] takes the complex work of a revered band in historical and social perspective…If you've enjoyed the band's music and want to dive deeper into their changing world, you'll enjoy this nuanced appreciation.
— The Current

[Where the Devil Don't Stay] is a book Deusner was born to write...Deusner distills the Truckers’ 25 year-plus history and then some into 296 pages.
— AL.com

[A] clever and engaging book…Deusner tours the South with the band as fully-engaged interviewees, visiting key Truckers destinations and tackling everything from Lynyrd Skynyrd to Confederate statues as he goes.
— MOJO Magazine

Where the Devil Don't Stay is a masterwork in the musical biography genre...For the diehards, this book will feel like the first time you heard Decoration Day or Southern Rock Opera. For anyone who loves a good yarn and good music, Where the Devil Don’t Stay is an essential read.
— The Marinade with Jason Earle

[Where the Devil Don't Stay] is filled with wonder and wander...It’s a book worthy of the band’s catalogue, as essential in its way as such classic DBT albums as Southern Rock Opera, Decoration Day, and American Band.
— Chapter 16

Deusner’s book is essential reading not only for fans of the Truckers but for anyone wanting to discover more about these quintessential roots rockers.
— No Depression, "Best Music Books of 2021"

[Where the Devil Don't Stay] shows the depth of research [Deusner] took as he includes a discography, bibliography and an index of the places and names that extravagantly lace the story…Deusner gives the band a sense of place.
— Athens Banner-Herald

The best Southern rock band of its generation also gets the treatment it was long overdue in Stephen Deusner’s terrific book about the Drive-By Truckers. Deusner’s book is both a biography of the band – and talented songwriters Patterson Hood, Mike Cooley and one-time Trucker, Jason Isbell – but it is also something of a musical atlas, richly mining the history of Southern spaces like Muscle Shoals, Memphis, Athens and Richmond to reveal more about the 'Southern Thing.'
— Reckon South, "25 of the best books to come out of the South in 2021"

The most brilliant decision veteran music journalist Stephen Deusner made for this book...was to structure his portrait of the band geographically, from Muscle Shoals to Memphis to Athens to Deusner’s home region, McNairy County, Tennessee...[Where the Devil Don't Stay] offers as much cultural criticism and post-civil-rights Southern history as straightforward autobiography...Where the Devil Don’t Stay approaches its subject with the same context and care as the band it portrays.
— Rolling Stone, "Best Music Books of 2021"

[Where the Devil Don't Stay] is the book-length study Drive-By Truckers fans have been waiting for...This book is as complex, moving, thrilling, and funny as one of DBT's marathon sets.
— New Books in Performing Arts

As brilliant and unflinching as its subject, you'll never look at the South, and southern rock the same way again. Highly recommended.
— The Big Takeover