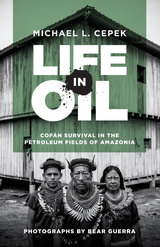 Oil is one of the world’s most important commodities, but few people know how its extraction affects the residents of petroleum-producing regions. In the 1960s, the Texaco corporation discovered crude in the territory of Ecuador’s indigenous Cofán nation. Within a decade, Ecuador had become a member of OPEC, and the Cofán watched as their forests fell, their rivers ran black, and their bodies succumbed to new illnesses. In 1993, they became plaintiffs in a multibillion-dollar lawsuit that aims to compensate them for the losses they have suffered. Yet even in the midst of a tragic toxic disaster, the Cofán have refused to be destroyed. While seeking reparations for oil’s assault on their lives, they remain committed to the survival of their language, culture, and rainforest homeland.

Life in Oil presents the compelling, nuanced story of how the Cofán manage to endure at the center of Ecuadorian petroleum extraction. Michael L. Cepek has lived and worked with Cofán people for more than twenty years. In this highly accessible book, he goes well beyond popular and academic accounts of their suffering to share the largely unknown stories that Cofán people themselves create—the ones they tell in their own language, in their own communities, and to one another and the few outsiders they know and trust. Their words reveal that life in oil is a form of slow, confusing violence for some of the earth’s most marginalized, yet resilient, inhabitants.

Michael L. Cepek is an associate professor of anthropology at the University of Texas at San Antonio. He is a board member of the Cofán Survival Fund, a US nonprofit that supports the Fundación Sobrevivencia Cofán, a Cofán-directed environmental and human rights organization, and the author of A Future for Amazonia: Randy Borman and Cofán Environmental Politics.

REVIEWS
Cepek's account of the Cofàn people's experiences, their lives literally rooted in some of Amazonia's most contentious and contaminated oil fields, is an extraordinary new testament…an essential addition to our collective library.
— American Ethnologist

The book makes for a fascinating read and is refreshing in its writing style . . . it raises important questions of autonomy and self-determination of a people and speaks to critical debates raging at present within the academia.
— Conservation and Society

For scholars and students interested in questions of oil, the environment, and indigeneity—or simply curious about what counts as great ethnography and how it might be done—the book is a must-read.
— Environment and Society

This book will help lay audiences and introductory students learn about the hydrocarbon industry's impacts on the Ecuadorian Amazon from a heavily Cofán perspective. Scholars of Indigenous Amazonia will appreciate the ethnographic detail regarding the lives of Cofán people and communities.
— Journal of Latin American Geography

Cepek's book records the experience of the Cofan People in Ecuador's Aguarico River region for over 25 years, before they knew what this black sticky stuff was, and puts hard fact to the decades long legal battle between Chevron (Texaco) and the locals. It's quite a compelling informative and an unbiased read.
— Intentional Paradigms

[P]owerful, moving, and accessible…This book is highly recommended for students learning about indigenous peoples and resource extraction, the ethics of energy, and contemporary life in the Amazon, and should be at the top of everyone's list of ethnographies written for a broader, public audience.
— Journal of the Royal Anthropological Institute

Profoundly nuanced and empathetic…Cepek produces one of the more realistic accounts of the effects of oil on everyday life in a community on the frontlines of oil extraction.
— Anthropological Quarterly

Life in Oil is an extraordinarily insightful ethnography that stakes out new ground in understanding indigenous life in Amazonia and survival beyond all odds.
— HAU: Journal of Ethnographic Theory

[Life in Oil] is a compelling complication of popular anthropological and environmental narratives about the Amazon. It is without doubt a direct refutation of any claim that petroleum operations in Ecuador have caused no harm to the Cofán…This book needs to be read widely, especially outside of anthropology, and outside the classroom...This book pushes open a clearing, and makes a place where outsiders can stop to consider what is happening in the Ecuadorian Amazon.
— Journal of Latin American and Caribbean Anthropology

Based on my own research in the region, Cepek’s work is extremely credible. It is rare to have a view of local culture that is so respectful of the importance of individual agency, and so understanding of the diversity of perspectives and practices within an indigenous society. Only with this understanding is it possible to understand ongoing change as the product of adaptive choices...[Life in Oil] is a highly readable book that can be recommended for classroom use.
— Bulletin of Latin American Research

This book is beautifully crafted, and it illustrates so much of what anthropology can do. It describes the politics and ethics of fieldwork. It demythologizes. It weighs in on various aspects of life, from religion to environment to economy. It takes up a ‘modern’ topic for anthropology (oil, court cases, corporations) in a ‘traditional’ context (indigenous people) and does so in ways that are smart and contemporary. It cries out to be paired with a more traditional textbook or set of lectures introducing undergraduates to anthropology. I would assign it in such a class in a heartbeat.
— Doug Rogers, author of The Depths of Russia: Oil, Power, and Culture after Socialism

This is a delightful read, if I can say that about such a harrowing topic. Cepek is an exceptional writer who provides an intimate and compelling portrait of a people and a situation that is usually portrayed in sensationalist and superficial terms. His deep commitment to, and long-term knowledge of, the social, environmental, and political context is unmistakable.
— Mary Weismantel, Professor of Anthropology, Northwestern University, author of Cholas and Pishtacos: Stories of Race and Sex in the Andes

This is one of the most compelling ethnographies I have ever read, honest and insightful from beginning to end, born of long-term observations and deep relationships. I cannot wait to assign it to my undergraduates because of its ability to convey complex concepts without getting bogged down in the intricacies of theoretical debates.
— Juliet Erazo, author of Governing Indigenous Territories: Enacting Sovereignty in the Ecuadorian Amazon