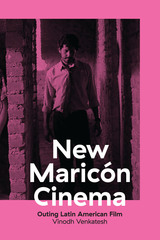 Recent critically and commercially acclaimed Latin American films such as XXY, Contracorriente, and Plan B create an affective and bodily connection with viewers that elicits in them an emotive and empathic relationship with queer identities. Referring to these films as New Maricón Cinema, Vinodh Venkatesh argues that they represent a distinct break from what he terms Maricón Cinema, or a cinema that deals with sex and gender difference through an ethically and visually disaffected position, exemplified in films such as Fresa y chocolate, No se lo digas a nadie, and El lugar sin límites.

Covering feature films from Argentina, Chile, Cuba, Ecuador, Mexico, Peru, the United States, and Venezuela, New Maricón Cinema is the first study to contextualize and analyze recent homo-/trans-/intersexed-themed cinema in Latin America within a broader historical and aesthetic genealogy. Working with theories of affect, circulation, and orientations, Venkatesh examines key scenes in the work of auteurs such as Marco Berger, Javier Fuentes-León, and Julia Solomonoff and in films including Antes que anochezca and Y tu mamá también to show how their use of an affective poetics situates and regenerates viewers in an ethically productive cinematic space. He further demonstrates that New Maricón Cinema has encouraged the production of “gay friendly” commercial films for popular audiences, which reflects wider sociocultural changes regarding gender difference and civil rights that are occurring in Latin America.

AUTHOR BIOGRAPHY
Vinodh Venkatesh is an associate professor of Spanish at Virginia Tech. He is the author of The Body as Capital: Masculinities in Contemporary Latin American Fiction.
REVIEWS
A timely, rigorous, and paradigmatic work. Beyond its original approach to queer production and to the way in which the cinematic image engages it, the book also locates itself in the forefront of studies about Latin American cinema and neoliberalism, which is one of the most intensely debated questions in scholarship today. This is one of the most theoretically sophisticated works of cinema studies I have read.
— Ignacio M. Sánchez Prado, Washington University, author of Screening Neoliberalism: Mexican Cinema 1988–2012