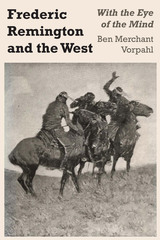 BUY
Frederic Remington and the West: With the Eye of the Mind
by Ben Merchant Vorpahl
University of Texas Press, 1978
eISBN: 978-1-4773-0522-5
Paper: 978-1-4773-0521-8
Frederic Remington and the West sheds new light on the remarkably complicated and much misunderstood career of Frederic Remington. This study of the complex relationship between Remington and the American West focuses on the artist’s imagination and how it expressed itself. Ben Merchant Vorpahl takes into account all the dimensions of Remington’s extensive work—from journalism to fiction, sculpture, and painting. He traces the events of Remington’s life and makes extensive use of literary and art criticism and nineteenth-century American social cultural and military history in interpreting his work. Vorpahl reveals Remington as a talented, sensitive, and sometimes neurotic American whose work reflects with peculiar force the excitement and distress of the period between the Civil War and the Spanish-American War. Remington was not a “western” artist in the conventional sense; neither was he a historian: he lacked the historian’s breadth of vision and discipline, expressing himself not through analysis but through synthesis. Vorpahl shows that, even while Remington catered to the sometimes maudlin, sometimes jingoistic tastes of his public and his editors, his resourceful imagination was at work devising a far more demanding and worthwhile design—a composite work, executed in prose, pictures, and bronze. This body of work, as the author demonstrates, demands to be regarded as an interrelated whole. Here guilt, shame, and personal failure are honestly articulated, and death itself is confronted as the artist’s chief subject. Because Remington was so prolific a painter, sculptor, illustrator, and writer, and because his subjects, techniques, and media were so apparently diverse, the deeper continuity of his work had not previously been recognized. This study is a major contribution to our understanding of an important American artist. In addition, Vorpahl illuminates the interplay between history, artistic consciousness, and the development of America’s sense of itself during Remington’s lifetime.
AUTHOR BIOGRAPHY
Ben Merchant Vorpahl (1937–1987) was Associate Professor of English at the University of Georgia, Athens.
TABLE OF CONTENTS


AcknowledgmentsIntroductionI. Genesis1. Solidity’s a Crust2. IsolatoII. Exodus1. Open Country2. The Tribe of Remington3. Adrift in New YorkIII. The Law and the Prophets1. The Illustrator as Parodist2. Stalking the Establishment3. The Strategy of Sequence4. Transient5. Eternal BronzeIV. Armageddon1. Archaic Man2. Top of Speculation3. The Real ThingV. The Last Horseman1. Letters from Another Country2. Demons of the NightIndex