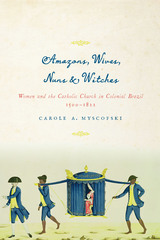 The Roman Catholic church played a dominant role in colonial Brazil, so that women’s lives in the colony were shaped and constrained by the Church’s ideals for pure women, as well as by parallel concepts in the Iberian honor code for women. Records left by Jesuit missionaries, Roman Catholic church officials, and Portuguese Inquisitors make clear that women’s daily lives and their opportunities for marriage, education, and religious practice were sharply circumscribed throughout the colonial period. Yet these same documents also provide evocative glimpses of the religious beliefs and practices that were especially cherished or independently developed by women for their own use, constituting a separate world for wives, mothers, concubines, nuns, and witches.

Drawing on extensive original research in primary manuscript and printed sources from Brazilian libraries and archives, as well as secondary Brazilian historical works, Carole Myscofski proposes to write Brazilian women back into history, to understand how they lived their lives within the society created by the Portuguese imperial government and Luso-Catholic ecclesiastical institutions. Myscofski offers detailed explorations of the Catholic colonial views of the ideal woman, the patterns in women’s education, the religious views on marriage and sexuality, the history of women’s convents and retreat houses, and the development of magical practices among women in that era. One of the few wide-ranging histories of women in colonial Latin America, this book makes a crucial contribution to our knowledge of the early modern Atlantic World.

Carole A. Myscofski is McFee Professor of Religion at Illinois Wesleyan University. She served as the area editor for ‘New Religions’ for the HarperCollins Dictionary of Religion and as the editor of the American Academy of Religion Academy Series published by Oxford University Press.

REVIEWS
The insights related to women in convents and changes in magic as an aspect of religious practice and everyday life will be interesting to scholars.
— The Americas