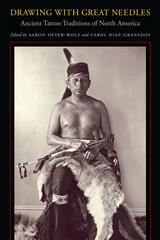 For thousands of years, Native Americans throughout the Eastern Woodlands and Great Plains used the physical act and visual language of tattooing to construct and reinforce the identity of individuals and their place within society and the cosmos. The act of tattooing served as a rite of passage and supplication, while the composition and use of ancestral tattoo bundles was intimately related to group identity. The resulting symbols and imagery inscribed on the body held important social, civil, military, and ritual connotations within Native American society. Yet despite the cultural importance that tattooing held for prehistoric and early historic Native Americans, modern scholars have only recently begun to consider the implications of ancient Native American tattooing and assign tattooed symbols the same significance as imagery inscribed on pottery, shell, copper, and stone.

Drawing with Great Needles is the first book-length scholarly examination into the antiquity, meaning, and significance of Native American tattooing in the Eastern Woodlands and Great Plains. The contributors use a variety of approaches, including ethnohistorical and ethnographic accounts, ancient art, evidence of tattooing in the archaeological record, historic portraiture, tattoo tools and toolkits, gender roles, and the meanings that specific tattoos held for Dhegiha Sioux and other Native speakers, to examine Native American tattoo traditions. Their findings add an important new dimension to our understanding of ancient and early historic Native American society in the Eastern Woodlands and Great Plains.

AUTHOR BIOGRAPHY
Aaron Deter-Wolf is a prehistoric archaeologist with the Tennessee Division of Archaeology and an adjunct professor in the Department of Sociology and Anthropology at Middle Tennessee State University. Carol Diaz-Granados is a research associate in the Department of Anthropology at Washington University, where she has taught for 32 years.
TABLE OF CONTENTS