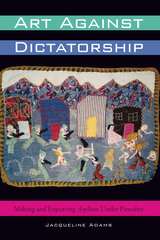 Art can be a powerful avenue of resistance to oppressive governments. During the dictatorship of Augusto Pinochet in Chile, some of the country’s least powerful citizens—impoverished women living in Santiago’s shantytowns—spotlighted the government’s failings and use of violence by creating and selling arpilleras, appliquéd pictures in cloth that portrayed the unemployment, poverty, and repression that they endured, their work to make ends meet, and their varied forms of protest. Smuggled out of Chile by human rights organizations, the arpilleras raised international awareness of the Pinochet regime’s abuses while providing income for the arpillera makers and creating a network of solidarity between the people of Chile and sympathizers throughout the world.

Using the Chilean arpilleras as a case study, this book explores how dissident art can be produced under dictatorship, when freedom of expression is absent and repression rife, and the consequences of its production for the resistance and for the artists. Taking a sociological approach based on interviews, participant observation, archival research, and analysis of a visual database, Jacqueline Adams examines the emergence of the arpilleras and then traces their journey from the workshops and homes in which they were made, to the human rights organizations that exported them, and on to sellers and buyers abroad, as well as in Chile. She then presents the perspectives of the arpillera makers and human rights organization staff, who discuss how the arpilleras strengthened the resistance and empowered the women who made them.