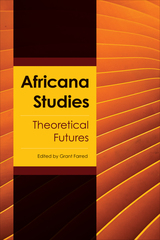 As Africana Studies celebrates its fiftieth anniversary throughout the United States, this invigor ating collection presents possibilities for the future of the discipline’s theoretical paths. The essays in Africana Studies focus on philosophy, science, and technology; poetry, literature, and music; the crisis of the state; issues of colonialism, globalization, and neoliberalism; and the ever-expanding diaspora. The editor and contributors to this volume open exciting avenues for new narratives, philosophies, vision, and scale in this critical field of study—formed during the 1960s around issues of racial injustice in America—to show what Africana Studies is already in the process of becoming.

Africana Studies recognizes how the discipline has been shaped, changing over the decades as scholars have opened new modes of theoretical engagement such as addressing issues of gender and sexuality, politics, and cultural studies. The essays debate and (re)consider black and diasporic life to sustain, provoke, and cultivate Africana Studies as a singular yet polyvalent mode of thinking.

Grant Farred is the author of Long Distance Love: A Passion for Football and The Burden of Over-representation: Race, Sport, and Philosophy (both Temple).